“Muhammad: Legacy of a Prophet” – A Film Created and Produced by Alex Kronemer and Michael Wolfe

Prophet Muhammad (s.a.s) changed world history in 23 years and continues to shape and inspire the lives of more than 1.4 billion Muslims around the world.

Simerg and its companion photoblog are pleased to make available for their readers around the world a link to the film, Muhammad: Legacy of a Prophet, that was originally aired on PBS to a world-wide audience exceeding 150 million people. The internet age is a blessing of our time that, through outstanding movies such as this, we are able to learn more about the wonderful and noble qualities of Prophet Muhammad. In his Presidential Address to the Seerat Conference in 1976, His Highness the Aga Khan had asked:

In the face of this changing world, which was once a universe to us and is now no more than an overcrowded island, confronted with a fundamental challenge to our understanding of time, surrounded by a foreign fleet of cultural and ideological ships which have broken loose, I ask, ‘Do we have a clear, firm and precise understanding of what Muslim Society is to be in times to come?’ And if as I believe, the answer is uncertain, where else can we search then in the Holy Qur’an, and in the example of Allah’s last and final Prophet?

The Holy Prophet’s life gives us every fundamental guideline that we require to resolve the problem as successfully as our human minds and intellects can visualise. His example of integrity, loyalty, honesty, generosity both of means and of time, his solicitude for the poor, the weak and the sick, his steadfastness in friendship, his humility in success, his magnanimity in victory, his simplicity, his wisdom in conceiving new solutions for problems which could not be solved by traditional methods, without affecting the fundamental concepts of Islam, surely all these are foundations which, correctly understood and sincerely interpreted, must enable us to conceive what should be a truly modern and dynamic Islamic Society in the years ahead.

Some of the noble qualities mentioned in Prince Karim’s tribute to the Holy Prophet Muhammad come alive as we watch this ground-breaking PBS film, which takes the viewers from the ancient Arabian sites where Prophet Muhammad’s story unfolded to the homes, mosques, and workplaces of some of America’s estimated seven million Muslims. The Los Angeles Times called the film “a candid, thoughtful, flowing, visually stunning film,” while The Catholic News Service commented that the Prophet’s biography offers viewers fresh insights into the spiritual foundations of Islam.

We are indebted  to Daniel Tutt of upf.tv for facilitating the showing of the film though this blog and Simerg. We strongly encourage all the viewers to watch the complete film, if not in one seating then by watching the timed segmented clips which will open at the bottom of the viewing window. We are sure you will enjoy this film. Please click:

Readers who wish to watch a preview of the film and other selected clips before viewing the full-length movie are invited to click http://www.muhammadfilm.tv or on the following image: 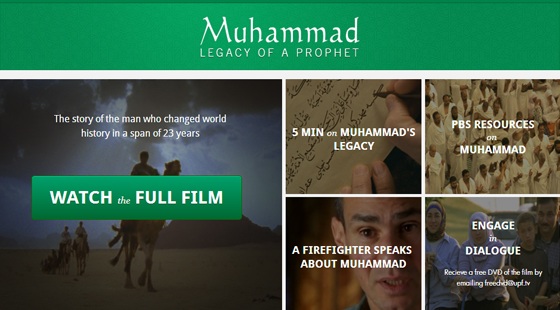 Please click for links to full length movie and excerpts