“…Your gift of this unique volume, which was prepared by your father, Alwaez Karim Pirani, and which contains articles and drawings by numerous Ismaili individuals as well as messages of Imam Sultan Muhammad Shah and Mata Salamat is a veritable treasure…” (message to Mr. Sadru Pirani from the Institute of Ismaili Studies)

Ask any middle aged Jamati member who he remembers as his religious education teachers in Dar-es-Salaam. A few names will certainly pop-up but one person who had been active from the 1940’s until the 1970’s teaching religious education at Aga Khan schools and at the special night classes was the iconic Karim Moledina Pirani, known as Karim Master (25 December 1909 – 28 June 1985).

His disciplinarian approach ensured that his students knew Ginans (religious poetry) and their meanings as well as recited the Dua (obligatory prayers) properly and understood its meanings. He would take a keen interest in their Jamatkhana attendance also. “You were not present in the students Majlis yesterday” he would confidently observe, as if he kept track of hundreds who were in attendance at the monthly student gatherings (Majlis) held on the top floor of the Darkhana Jamatkhana, located in Dar-es-Salaam’s city centre.

During the course of his life, Karim Master served the Ismaili community for over 40 years in various capacities. He was a keen volunteer and also a scout master before he assumed the position of the Religious Head Instructor of the Aga Khan Schools in Dar-es-Salaam in 1947. He was also an Honorary Missionary (Alwaez). One of the tasks that was assigned to him was to prepare the publication of the third issue of the journal “Rahe Rast” under the auspices of the Aga Khan Boys School’s Students Religious Society (SRS), of which he was the founder. This journal was brought to my attention by his son, Sadru Pirani of Ottawa. That this 1948/1949 publication, which has traveled thousands of miles across numerous continents over a period of several decades, has remained in a good condition is a tribute to Sadru Pirani and his family. 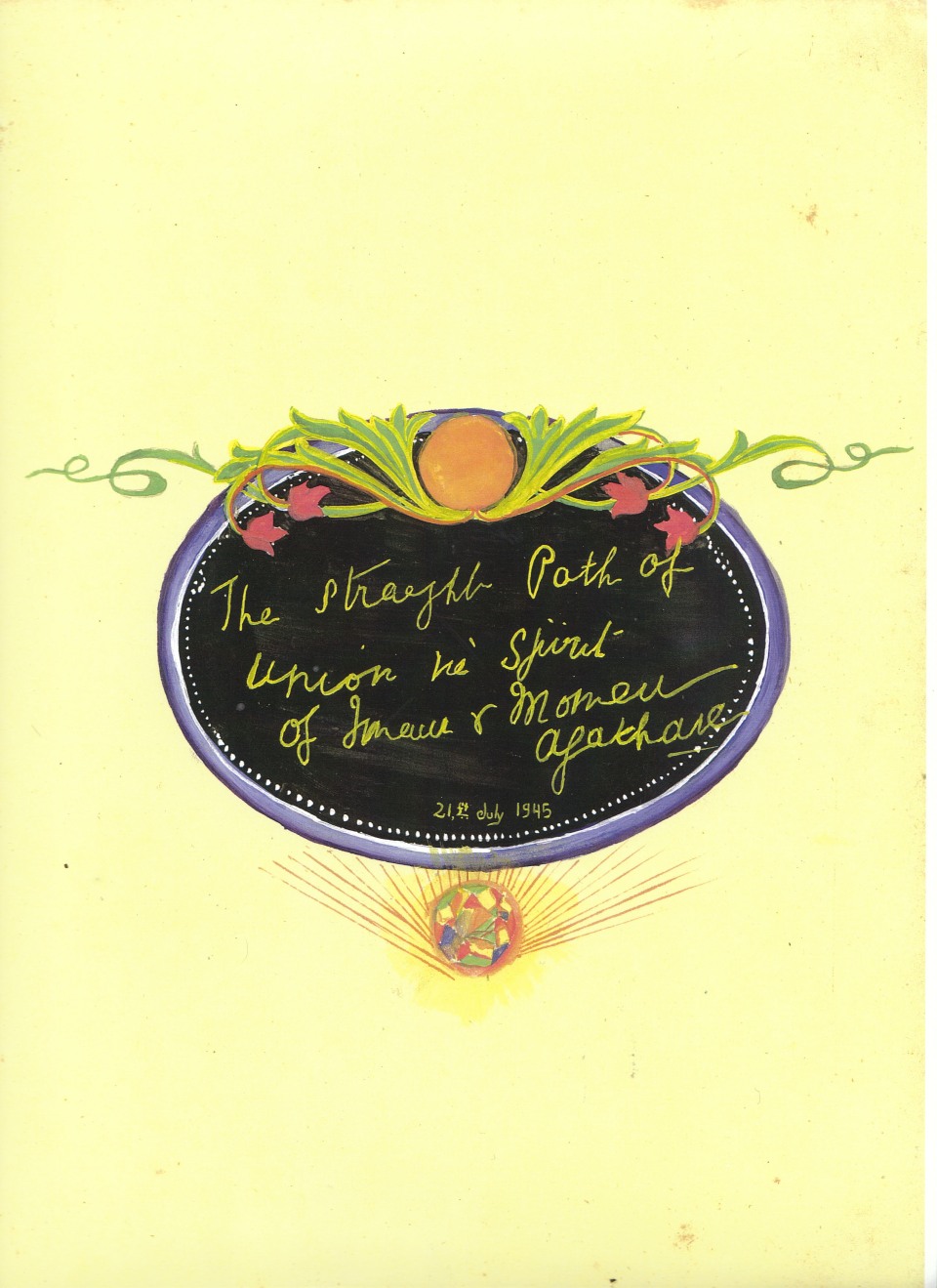 Autographed message of Imam Sultan Muhammad Shah. “In 1945, when the Imam autographed the first number of Rahe Rast, he gave it its meaning: ‘The Straight Path of Union in Spirit of Imam and Momen’.” Quote from article by R.H. Bhanji in “Rahe Rast”.

The “Rahe Tast” (True Path) as it is known is a magnificent original volume of messages, articles, paintings and illustrations. Many of the pages of the volume are bordered with red and green colours, and contain other embellishments such as flowers and butterflies – these are certain to bring a smile and joy to anyone’s face. One can lightly stroke a page and feel the texture of the colours. The volume is absolutely vibrant. The English text was done using a typewriter, while the entire Gujarati section has been neatly hand written. Corrections to the English and Gujarati texts are tidily done in writing.

This particular (3rd) issue in Mr. Pirani’s possession was produced to commemorate three birthdays of the late Imam’s family, though the birthdays were several weeks or months apart – those of the 48th Imam himself (November 2), the present Imam, Mawlana Shah Karim (December 13), and the late Prince Aly Khan (June 13). 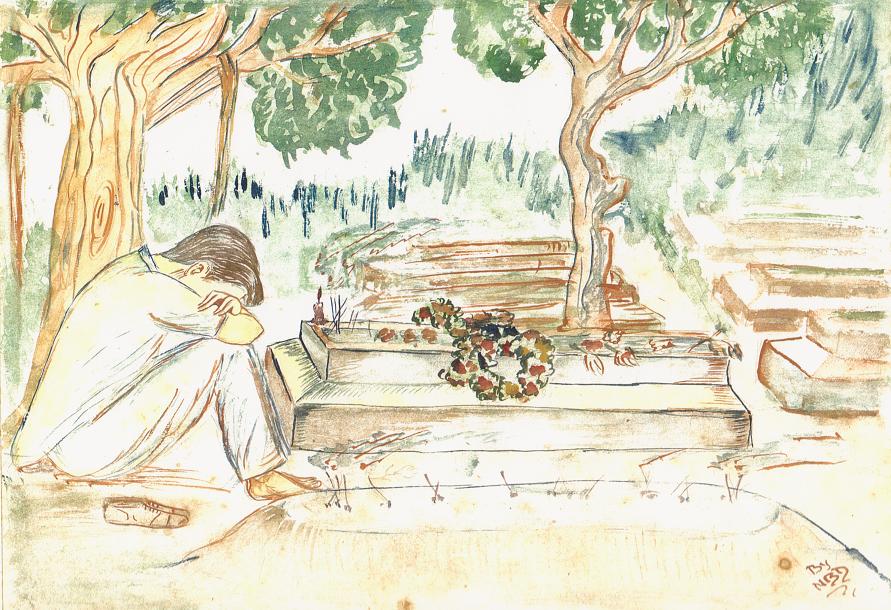 An illustration in “Rahe Rast” of a youth grieving by a fresh burial site. Note the incense sticks (agharbati) on the graves.

In his introduction, Karim Master expresses admiration for those who contributed toward the 130 page, appx. 14″ length x 11″ width, hard bound journal. In particular, he has praise for Shamsh Kanji who did most of the illustrations and paintings in the book. The work was published as a beacon of hope and to establish a glorious tradition. Mr. Pirani recognizes the sacrifices of the students during the war and says that these students who surmounted the ravages of war “have something to boast about.” He adds, “Rahe Rast has been a kindling flame of honesty and self-sacrifice, as it befits a Momen whose Iman is never shaky.”

In one of the chapters, a 1947 report of the Student Religious Society highlights some of the goals and activities of the society. Their duties included:

1. To look after the students in Jamatkhana and keep them silent;
2. To stop the boys wandering outside and going to cinemas at the Jamatkhana time;
3. To look after the characters of the boys and to help improve them;
4. To give turns for Jamatkhana prayers; and
5. To keep up with literary activities such as the publication of “Rahe Rast.”

The report further notes that the average daily Jamatkhana attendance for the 5 months preceding the 1947 report was 65.37 per cent.

Another painting, this time of a boat, by artist Shamsh in the richly illustrated “Rahe Rast”

Among the contributors to the journal was Alwaez Abu Aly Alibhai, who passed away in Vancouver in 2008. The volume includes paintings of the Noorani family and also messages from Imam Sultan Mahomed Shah and the Begum, Om Habibah Mata Salamat. The 48th Imam’s message was sent for the first issue of the magazine published in 1945. Interestingly the whole concept of “Rahe Rast” (True Path) has been encapsulated in the Imam’s autographed message about which an article notes:

“In 1945, when the Imam autographed the first number of Rahe Rast, he gave its meaning: ‘The Straight Path of Union in Spirit of Imam and Momen.'”

Mr. Sadru Pirani decided to gift the volume to the Institute of Ismaili Studies in London, as he felt the Institute’s library would preserve this historical memory in its collection of Ismaili heritage. In a message to Mr. Pirani, Alnoor Merchant, the former Head Librarian of the Institute wrote:

“Your gift of this unique volume, which was prepared by your father, Alwaez Karim Pirani, and which contains articles and drawings by numerous Ismaili individuals as well as messages of Imam Sultan Muhammad Shah and Mata Salamat is a veritable treasure… through this generous gift you are playing a pivotal role in ensuring that historical materials – be they textual, photographic or audio visual – relating to Ismailism are preserved; it is our legacy for the future.”

Subscribe at top right of this page to receive new post notifications. We welcome feedback from our readers. Your feedback may be edited for length and brevity, and is subject to moderation. We are unable to acknowledge unpublished letters.