Photo Essay: The Ismaili Jamatkhana in Myanmar, With Notes on the Community’s Patriotic Spirit

Editor’s note: This post is an amalgamation of selected photos of the Ismaili jamatkhana in Rangoon taken by Muslim Harji of Montreal Canada during his recent visit to Burma (now Myanmar) with photos and text produced in an earlier piece under the title “Burmese Patriotism” on this blog’s companion literary website, http://www.simerg.com. In the coming weeks, Simergphotos will be publishing more photos from Harji’s exciting seven-week trip to SE Asia. The photo essays will cover many important aspects of life in Myanmar as well as Cambodia and Vietnam.

PHOTOS AND TEXT BY MUSLIM HARJI
(with additional research and material by Abdulmalik J. Merchant and other sources)

I recently spent seven exciting weeks crisscrossing Myanmar (formerly known as Burma), Cambodia and Vietnam with my wife Nevin, and my sister, Mehrun, and her husband Suleman of Edmonton. As part of my visit to Burma, I was very happy to visit the Ismaili jamatkhana in Rangoon (or Yangon) and meet members of the jamat. I found Burma to be an absolutely amazing destination, frozen in time with stunning landscape. I encountered kind and gentle people but I have to say that the country is still in its raw state. My recommendation to visit Burma would be for the adventure seeking, intrepid travellers. The country’s largest city and commercial centre Yangon (or Rangoon), which used to be its capital until March 2006, has a population of over 5 million.  Rangoon’s new sector is modern like any city with high rises, office spaces, condos and tree-lined boulevards but as usual the older sectors is full of life. Buddhism is the prominent religion.

With regard to the jamat in Burma, it is interesting to record the following excerpt by Imam Mawlana Sultan Mahomed Shah, His Highness the Aga Khan (1877-1957) when he spoke at a dinner organized by the Aga Khan Student’s Union in London in June 1951.

“Take as an example for your patriotism, your brothers in Burma, They have identified themselves 100 percent with Burma. They don’t look across the border. Whatever country you choose to live in, work for it, mix with its people, achieve its outlook and keep religion in its proper place – in your soul. If you do this, you will find many of your problems solved. When you live in a country you become a member of that country.” (reported in The East African Standard, Nairobi, 8 June, 1951).

The Imam advised his followers that the countries they chose to make their homes were the ones they owed their loyalty and affection. They must, he said, identify themselves with those countries if they wished to prosper in the years to come.

The date of this photo of Imam Sultan Mahomed Shah with members of the Burmese jamat cannot be ascertained but it appears to be from the Imam’s second visit to the country in 1914, when he was 37 years old. Photo: Anwar Virani Collection, Ottawa.

This advice that the Ismaili jamat followed was later recorded in the Imam’s autobiography, the Memoirs of Aga Khan (London, 1954) when he wrote:

“The early months of 1914 found me on another visit to Burma. I then took a step of some importance in respect of my Ismaili followers. I advised them to undertake a considerable measure of social and cultural assimilation. Burma, although annexed to the British Empire, and at this time under the control of the India Office, was a country in which national, patriotic sentiment was strong, and nationalism a spontaneous, natural, and continuous growth. I was convinced that the only prudent and proper policy for my followers was to identify themselves as closely as possible with the life of Burma socially and politically, to give up their Indo-Saracenic names, habits, and customs, and to adopt, permanently and naturally, those of the people alongside whom they lived, and whose destiny they shared.” (p. 130) 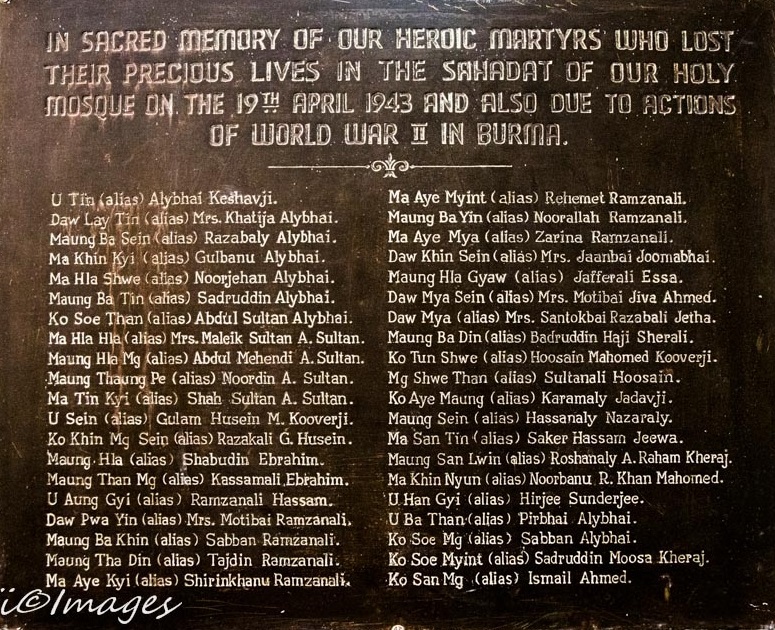 The photo above shows the plate bearing the names of the 31 persons who died in the bombing as well as (9) others who died during WWII. Note the Burmese names adopted by Ismailis, with their aliases. The transcript at the top of the plaque is as  follows: “In sacred memory of our heroic martyrs who lost their precious lives in the sahadt of our holy mosque on the 19th April 1943 and also due to actions of World War II in Burma.”  Photo: Muslim Harji. Copyright.

Thereafter many Ismailis assumed Burmese names. A great tragedy befell the Jamat when the British launched heavy bombardment on Rangoon. The resulting outcome was heavy damage to the jamatkhana located at Mughal Street (renamed Swhebontha Street) , which resulted in the loss of 31 innocent Ismailis. The Imam sent a message on October 27, 1954 to the Council of Burma that those bold persons who were martyred during the war were in his thoughts. The Imam also advised to place a memorial plate, bearing their names outside the wall of the Jamatkhana. 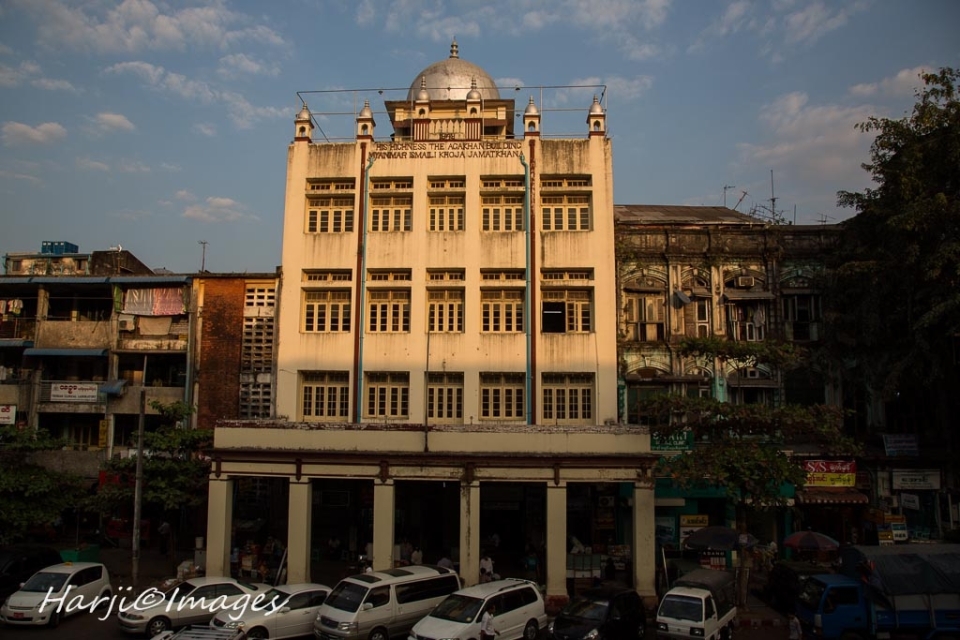 An external view of the jamatkhana

When the war ended, Wazir U Kan Gyi renovated the Jamatkhana in 1949 with his own expenses. On December 22, 1949, the Imam sent a message from Cairo, addressing the Supreme Council, Rangoon, showing his happiness upon the completion of the jamatkhana, and blessed Wazir U Kan Gyi for his great services. The Imam also advised that the  opening ceremony should be done by  the President or Prime Minister of the Republic. As shown on the plaque, the grand event took place on January 5, 1950 by Thakin Nun, the Prime Minister of Burma. 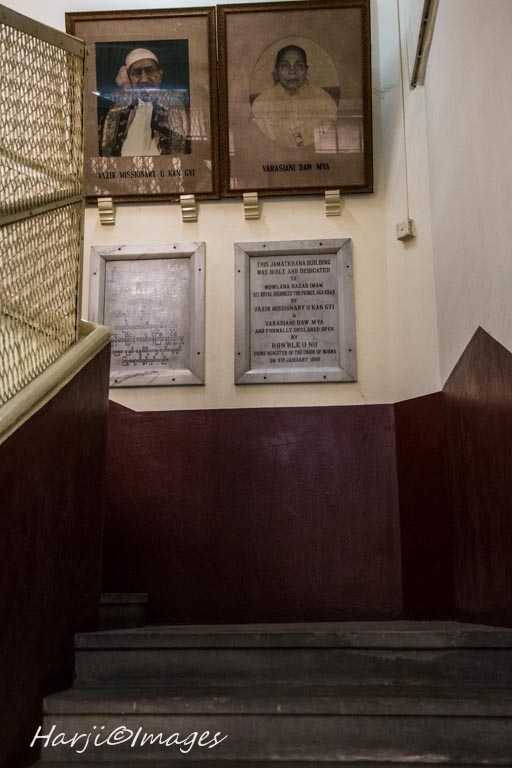 The jamatkhana entrance containing a plaque of its inauguration, and portraits of two prominent members of the Burma Jamat.
See close-ups below. Photo: Muslim Harji. Copyright. 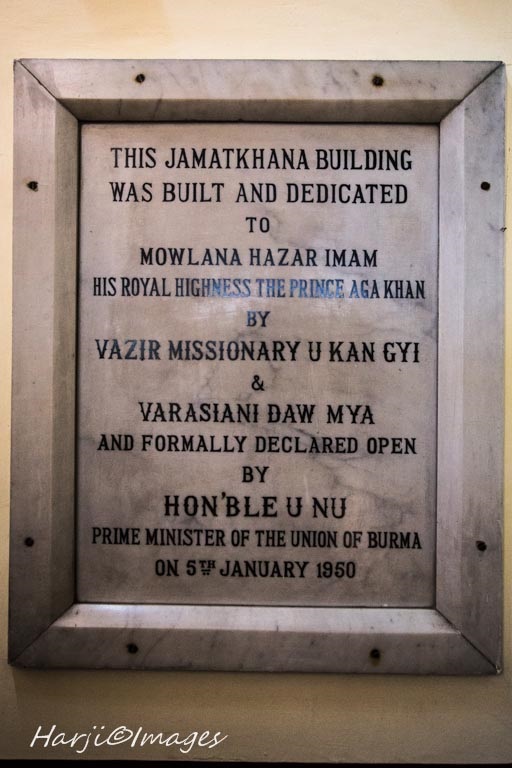 Portrait of Vazir U Kan Gyi who built the renovated jamatkhana after it
was damaged during the Second World War. Photo: Muslim Harji. Copyright. 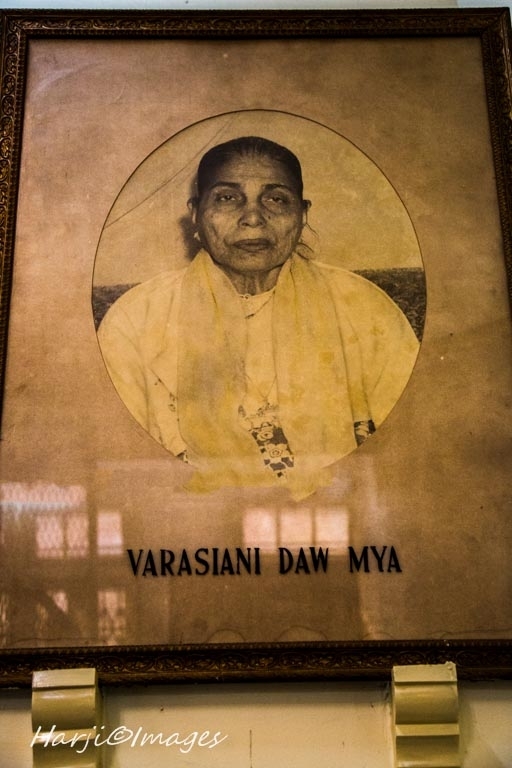 A portrait at the entrance of another prominent member of the Myanmar jamat,
Varasiani Daw Mya. Photo: Muslim Harji. Copyright. 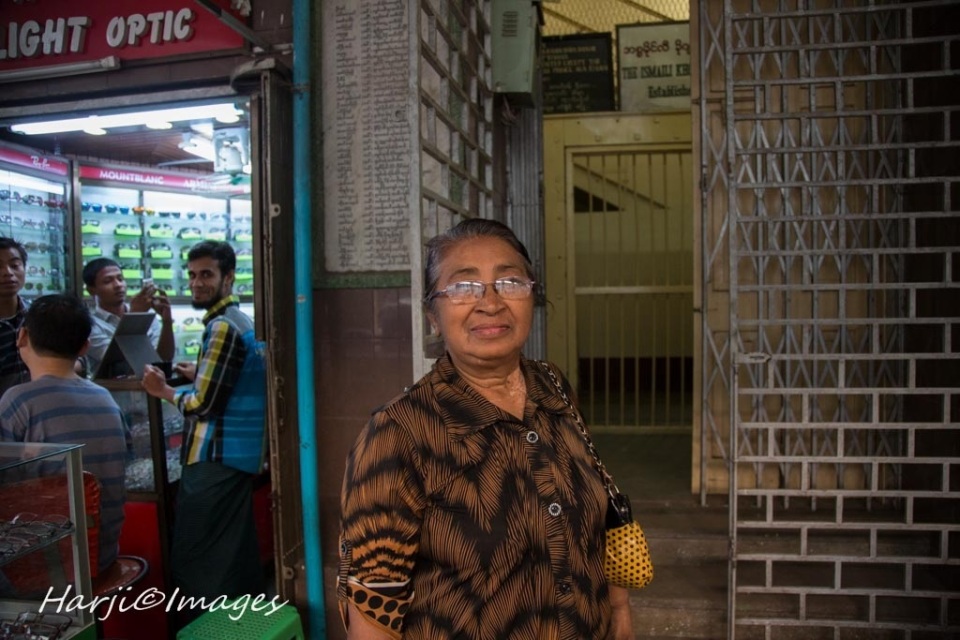 A view from the top of the jamatkhana with the illuminated Shwedagon Pagoda in the distance. Photo: Muslim Harji. Copyright.

The location of the jamatkhana. Photo: Muslim Harji. Copyright.

The little light boxes or minarets on top of the jamatkhana. Photo: Muslim Harji. Copyright.

A close-up view of the jamatkhana. Photo: Muslim Harji. Copyright.

In response to an earlier article published at http://www.simerg.com, we received the following feedback from a reader, who grew up in Burma before settling in Bangladesh in 1965

REFLECTIONS BY A FORMER BURMESE ISMAILI

Mawlana Sultan Mohamed Shah visited Rangoon with Mata Salamat from January 20-26, 1951. The arrangements that were in place were extremely well-coordinated and there were approximately one thousand people in attendance for the Mulaqat with the Imam. A marriage ceremony was also held and the brides and the bridegrooms sat in front of the stage where Mawla and the Begum were seated. When the Imam and Begum later visited the royal reception in the presence of the Prime Minister, the Imam wore a magnificent Burmese costume. 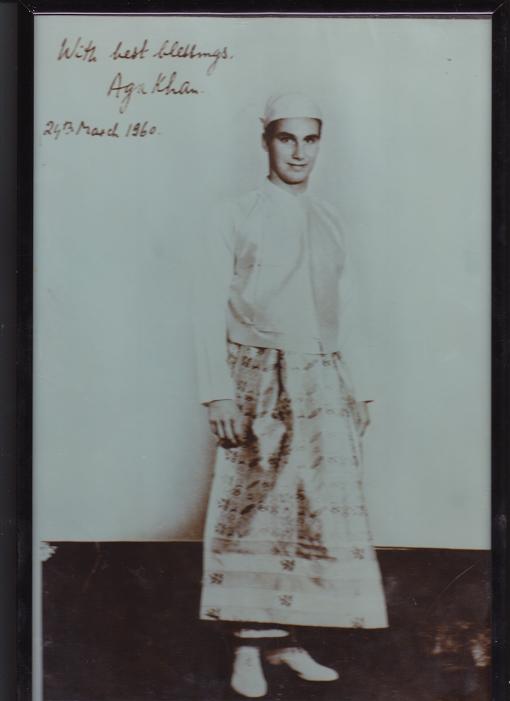 A signed photo of His Highness the Aga Khan, 49th Ismaili Imam. He is pictured in a
traditional Burmese dress during his March 1960 visit to Burma when he celebrated
Navroz with the Rangoon Jamat. Photo: Anwar Virani Archives, Ottawa

Then later when Mawlana Hazar Imam visited Burma in 1960, he was also photographed in a Burmese costume. That visit was remarkable because Hazar Imam celebrated Navroz with the Burmese Jamat and conveyed Navroz Mubarak in a Farman which is widely known and read every Navroz around the world.

These are some details about the Jamatkhana as per my recollection when I left in 1965:

The jamatkhana is located in the centre of the commercial hub on Swhebontha Street (formerly Mughal Street).

← A Very Beautiful Photo Book by Prince Hussain Aga Khan at a Very Special Price: The Hardback Edition of “Animal Voyage”
My Late Mother, Jean Kirk, and Her Special Collection of Rare Photos of His Highness the Aga Khan’s Visits to the Aga Khan Primary School in Nairobi →

28 thoughts on “Photo Essay: The Ismaili Jamatkhana in Myanmar, With Notes on the Community’s Patriotic Spirit”