A Collection of 48 (Plus 1) Memorable Images from the Life of the 48th Imam of the Ismaili Muslims, His Highness the Aga Khan III

High up on the west bank of the Nile in Aswan stands the tomb of Mawlana Sultan Mahomed Shah, His Highness the Aga Khan III, who died in 1957, and of his wife the Begum, who died in 2000. The Mausoleum is a very elegant pink granite structure of late 1950 origin. Aswan was the favourite wintering place of the Aga Khan and the Begum. The family’s white villa, Noor al Salaam, is seen in the garden beneath the tomb. Every day that his widow was at the Villa, she placed a Red Rose on his white Carrara marble tomb. Omme Habibah, popularly referred to as Mata Salamat by the Ismailis died on July 1st, 2000. The other months, a gardener filled this function.This magnificent mausoleumwas modelled on the Fatimid tombs in Egypt. Photo: © Sarite Sanders. 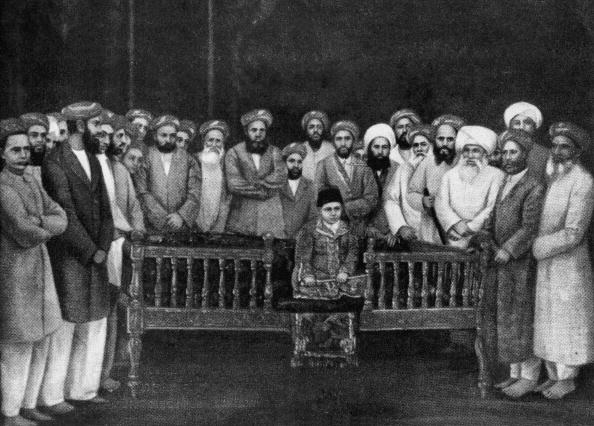 September 1885: Mawlana Sultan Mahomed Shah, His Highness the Aga Khan III, at his enthronement ceremony as 48th Imam of the Shia Ismaili Ismaili Muslims in Bombay at the age of 7. Photo: Keystone/Hulton Archive/Getty Images, Copyright

“I can only say to everyone who reads this book of mine that it is my profound conviction that man must never ignore and leave untended and undeveloped that spark of the Divine which is in him.”

The Memoirs of Aga Khan: The autobiography of the 48th Ismaili Imam, Sultan Mahomed Shah, His Highness the Aga Khan, was first published in London in 1954 under the title, The Memoirs of Aga Khan: World Enough and Time. The Memoirs was originally published in English (the British and American editions being published in 1954), and while these English versions were circulated widely in the English-speaking world, a remarkable fact is that the 48th Imam’s autobiography was translated into several languages, both eastern and western. Besides translations into Gujarati, Sindhi and Urdu, The Memoirs was translated into six European languages, all of which were published during 1954 and 1955. An interesting feature is that many of the illustrations in these translations are different to those that appear in the English editions.

Mawlana Sultan Mahomed Shah as a young boy in the Spanish Edition. 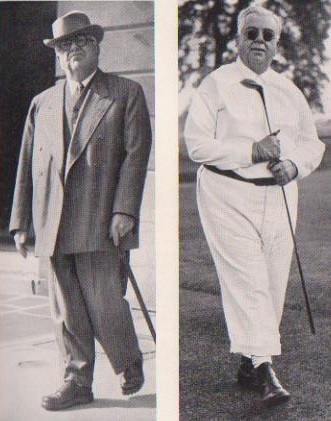 Portraits of Mawlana Sultan Mahomed Shah in the German Edition.

A portrait of Mawlana Sultan Mahomed Shah and Mata Salamat in the French Edition.

A photo of Mawlana Sultan Mahomed Shah and Mata Salamat in Mashad, Iran, which appears in the Norwegian edition.

A thoughtful study of  Mawlana Sultan Mahomed Shah done in clay by his wife, the Begum Aga Khan, Omme Habibah. Image by © Bettmann/CORBIS 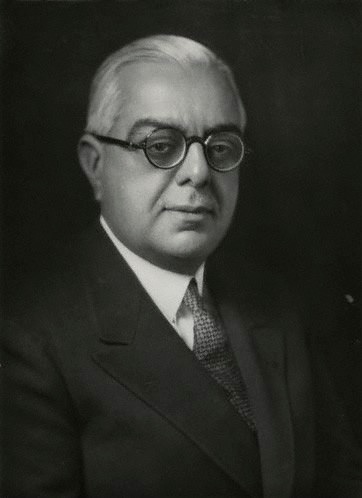 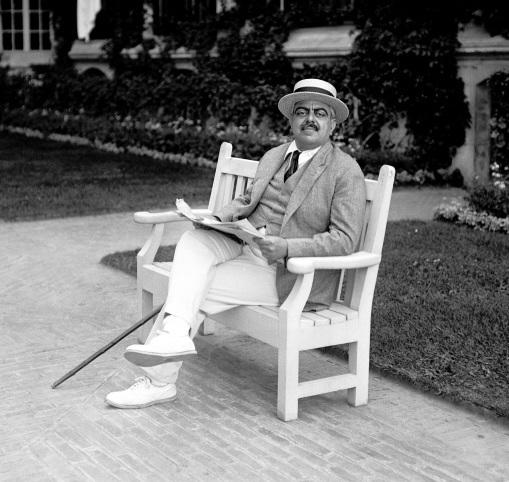 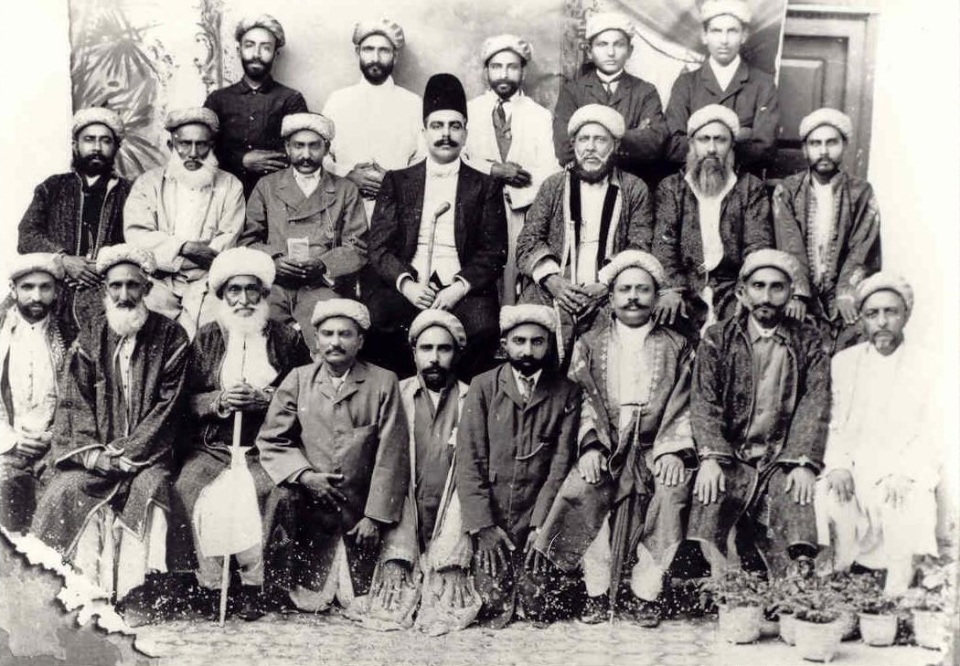 Mawlana Sultan Mahomed Shah pictured in Rajkot, India, with the Ismaili leadership. Itmadi Kassam Kothari was the President of the Kathiawar Education Board and is shown seated to the Imam’s left. In suit and tie, to the Imam’s right, is the late Rai Pirbhai Rayani who later in life settled in Calgary, Canada. Photo: Bashir Kothari/Nuri Kothari, Calgary, Canada. 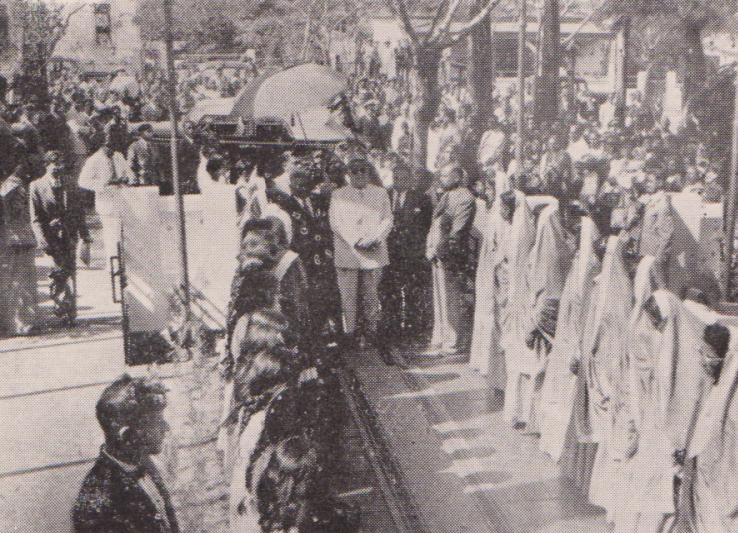 A 1945 photo of the old Lourenco Marques Jamatkhana which was described by Mawlana Sultan Mahomed Shah as being one of the finest in Africa. Both the interior and exterior underwent major changesduring the 1960’s.. 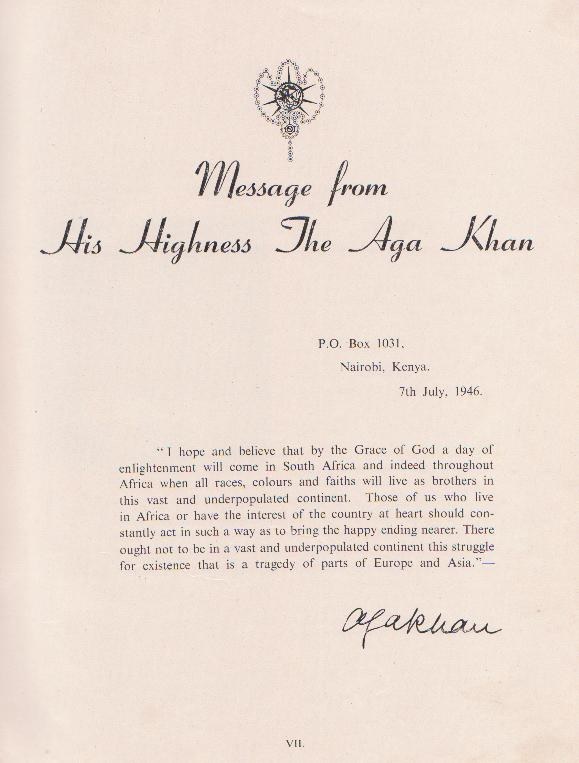 Photogravure illustrating the magnificent floral decorations and seating design at the reception given to Aga Khan III and the Begum Aga Khan by the Aga Khan’s Ismailia Provincial Council, Pretoria, on Thursday August 9th 1945 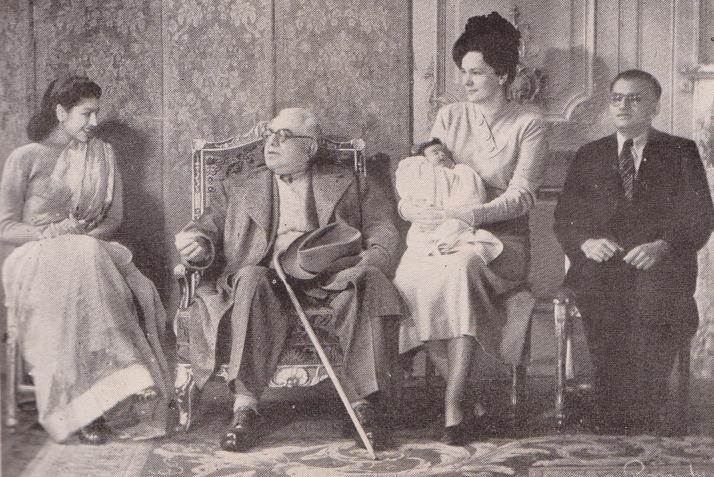 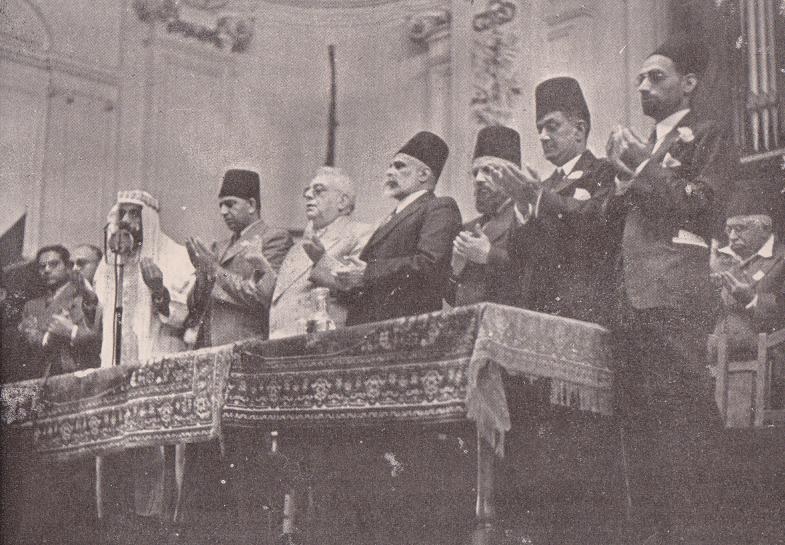 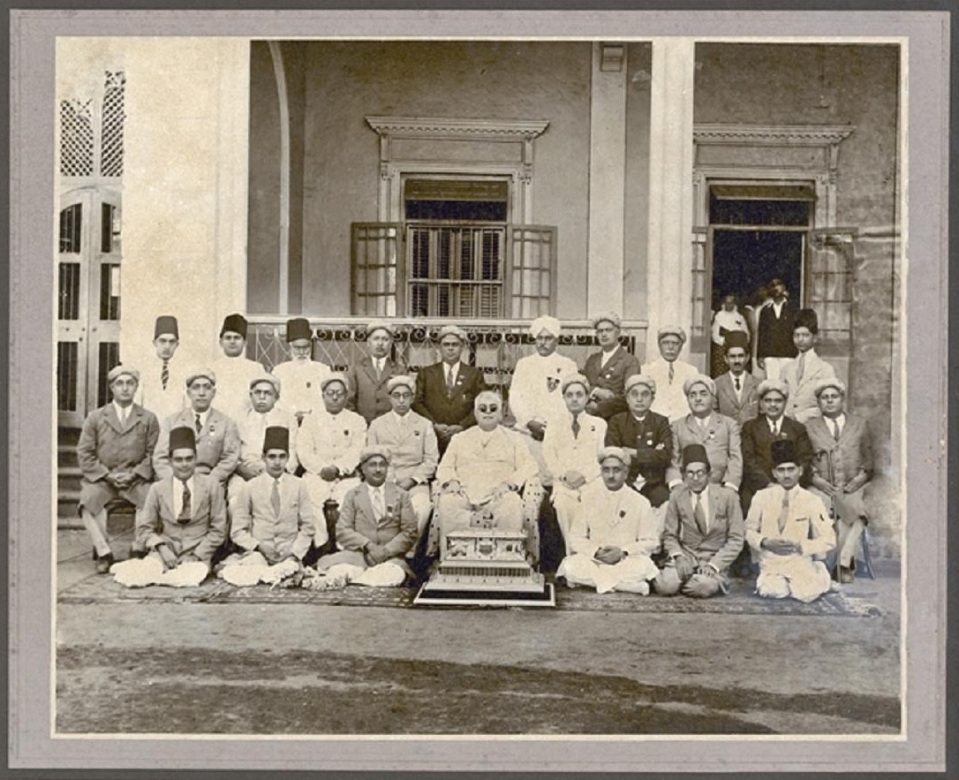 March 1936: Photo taken in India on the occasion of the presentation of a casket by a group of Ismaili missionaries to Mawlana Sultan Mahomed Shah to mark the occasion of his Golden Jubilee. The Casket was created and donated by ‘Senior’ Missionary Alijah Moloobhai Allarakhia Jangbarwalla. Photographed by: Golden Art Studio; Photo: The Late Ameer Janmohamed Collection, London, UK. 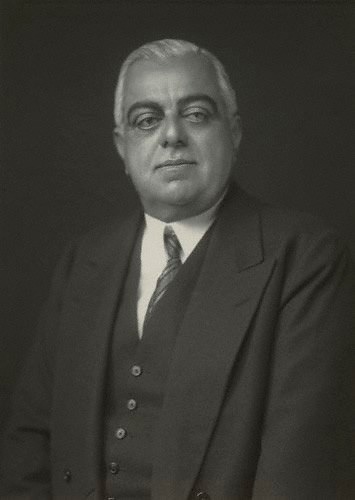 A Mint stamp of Mawlana Sultan Mahomed Shah issued in 1990 as part of Pakistan’s “Pioneers of Freedom” series. 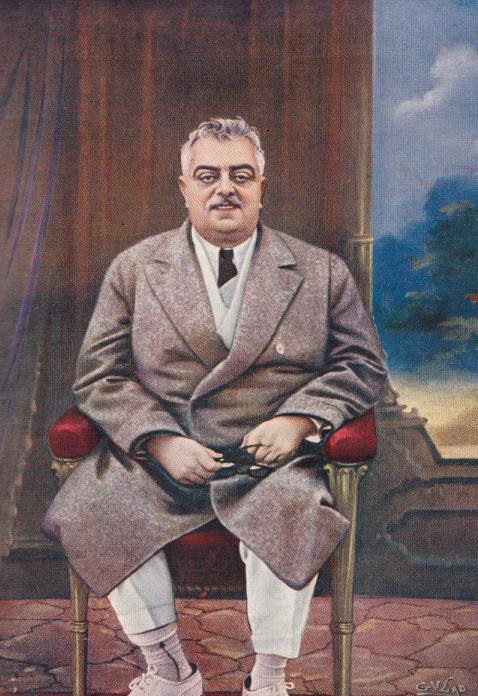 Mawlana Sultan Mahomed Shah pictured with Badrudin Adatia, who currently lives in Ottawa, Canada. Recalls Adatia: “I wanted to take a picture of him with us and I asked his permission. The room was dim, however, and I didn’t have a flash on my camera. Although he was very sick and could not even walk, he told me he would head toward the window where there would be better light. Imagine! I clasped my hands with respect and said, “No Khudavind. I will take the picture just as we are.” Photo: Badrudin Adatia collection. 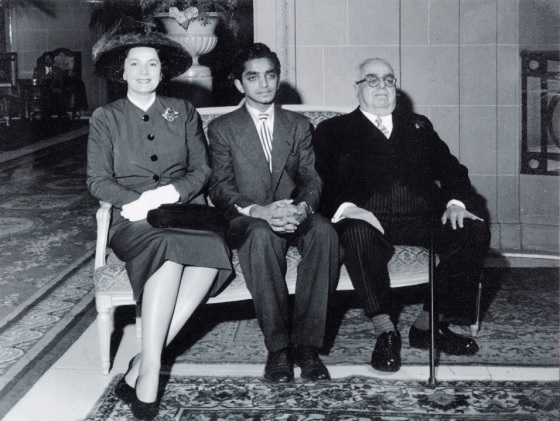 May 1951: Mr. Akber Premji was asked to sit himself between Mawlana Sultan Mahomed Shah and Mata Salamat during his audience at the Ritz in London. Photo: Akber Premji Collection. Copyright. 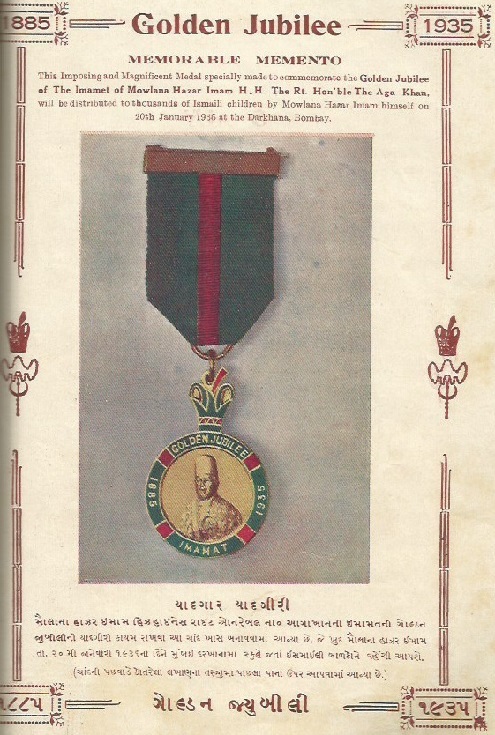 The Golden Jubilee medal that was distributed by Imam Sultan Mahomed Shah to
thousands of Ismaili children. 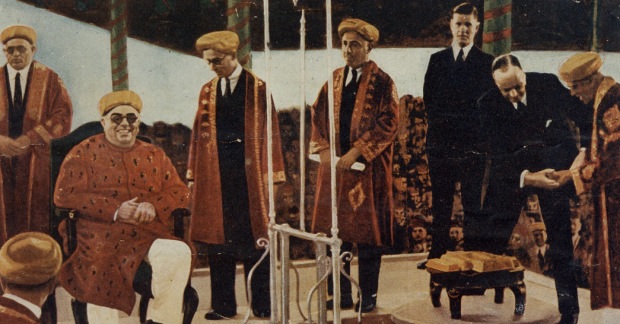 Mawlana Sultan Mahomed Shah being weighed in gold during his Golden Jubilee celebrations held in Nairobi in 1936. The Governor of Kenya is given the gold bars by the Mukhi. Photo: Shaukat Noormohamed, Toronto/Mohammad Jindani, UK.

August 1946: Vast crowds of Ismailis from all over the world had gathered in Dar-es-Salaam for the Diamond Jubilee Celebrations of Mawlana Sultan Mahomed Shah. Photo: Motani Collection, Ottawa.

Mawlana Sultan Mahomed Shah speaking at the Diamond Jubilee Celebrations in Dar-es-Salaam. From Madagascar to Central Asia, Ismaili pilgrims converged on the city for the weighing ceremony on August 10, 1946 in Dar-es-Salaam. Five months earlier, many saw a similar weighing in Bombay. Both ceremonies raised over 640,000 British pounds each in the Aga Khan’s weight against diamonds. 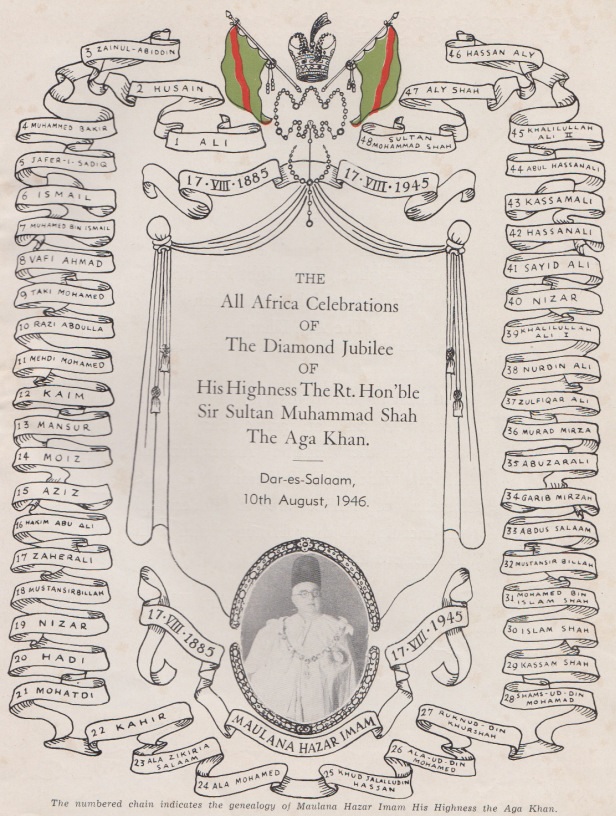 A genealogical depiction of  the 48 Ismaili Imams through a numbered chain which starts with Hazrat Ali as the first Imam alongside the Imamat crest, and which then continues in an anti-clockwise direction with the popular names of the Imams up to the 48th Imam, Sultan Mahomed Shah. The crest of the Ismaili Imam is flanked by the famous red and green flag of the Ismaili Imamat. A portrait of “MAULANA HAZAR IMAM” appears at the foot of the chart. The dates on either side of the portrait, 17.VIII.1885 and 17.VIII.1945, are respectively the date Imam Sultan Mahomed Shah became the 48th Imam (at the age of seven – he was born on November 2, 1877) and the date of the completion of his sixty years of the Imamat. Photo: Diamond Jubilee Souvenir published by the Ismailia Association of Africa. Credit: Sadruddin Khimani Family Collection, Vancouver, Canada.

Mawlana Sultan Mahomed Shah acknowledges the affection of his followers who had gathered in their thousands to mark his Platinum Jubilee celebration at the Aga Khan Gymkhana in Karachi.

Prince Aly Khan, eldest son of  Mawlana Sultan Mahomed Shah, displaying a Platinum Plaque which he received on behalf of his ill father on the occasion of the Platinum Jubilee Celebrations in Bombay in February 1957. Photo: Ilm Mgazine, UK. 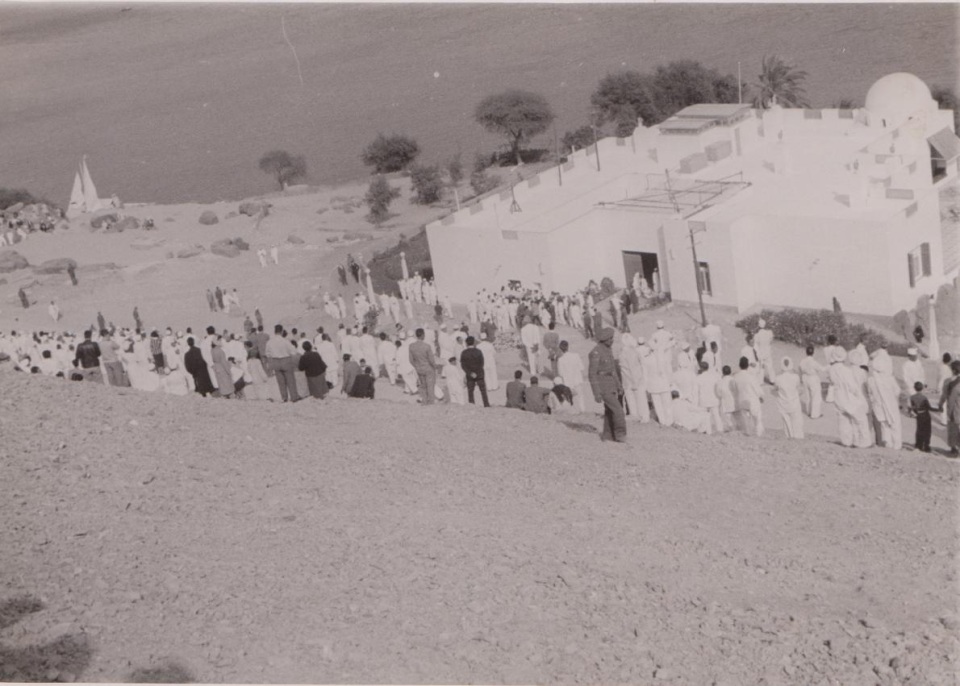 February 1959: The villa, Noor al Salaam, where the body of  Mawlana Sultan Mahomed Shah lay temporarily buried before it was moved to its final resting place in the mausoleum. © Photo: Motani Collection, Ottawa

“Verily, God did choose Adam and Noah, the progeny of Abraham, and the progeny of Imran above all the worlds, descendants, one from the other: And God heareth and knoweth all things.” — The Holy Qur’an.

“The Ismaili Imamat is a supra-national entity, representing the succession of Imams since the time of the Prophet.” — His Highness the Aga Khan, Ottawa, February 27, 2014. 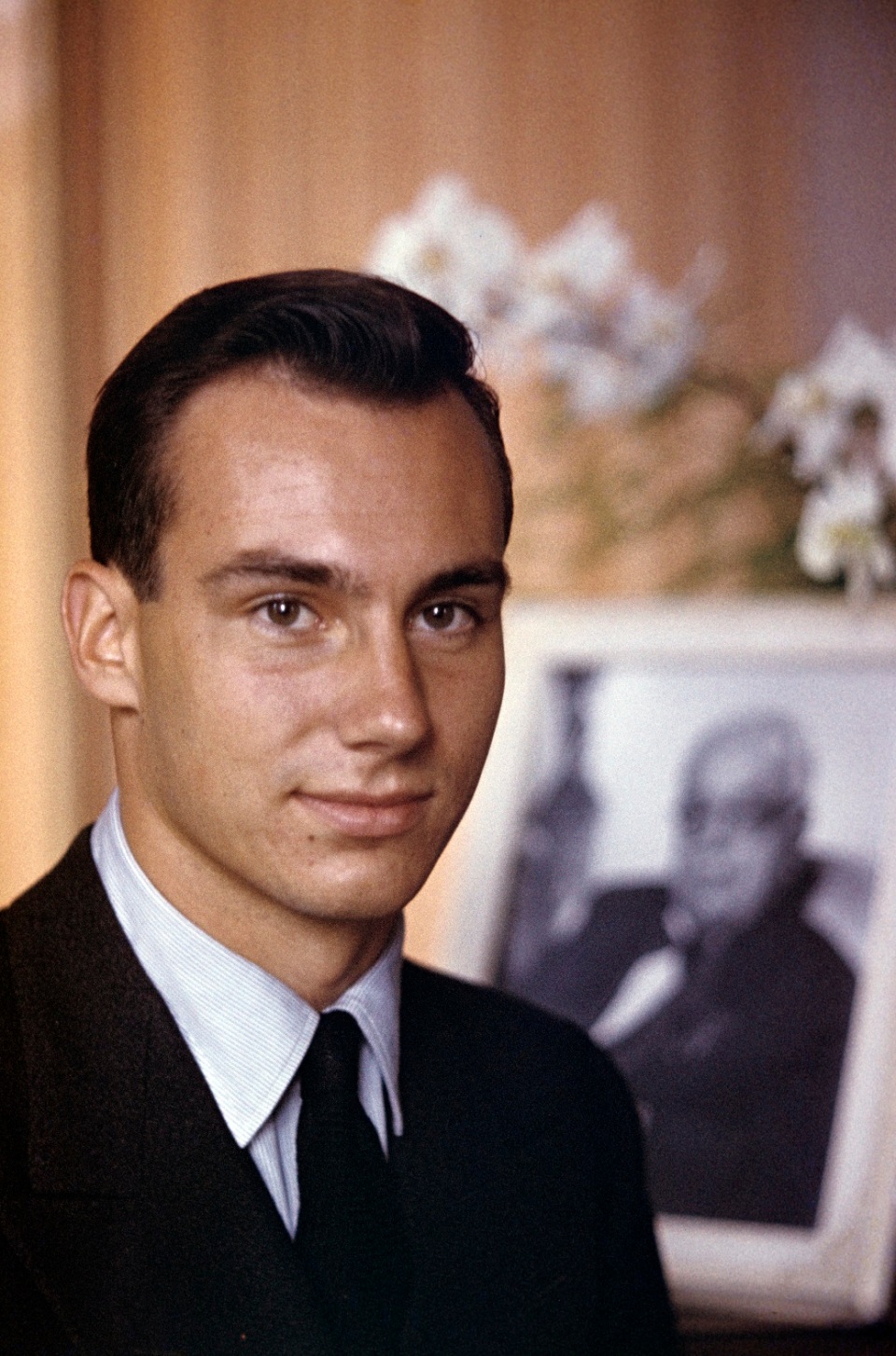 A portrait of the Mawlana Shah Karim al Hussaini Hazar Imam, His Highness the Aga Khan, taken shortly after he succeeded his late grandfather to the throne of Imamat on July 11, 1957 at the age of twenty. A framed portrait of the late 48th Imam who served the community for 72 years is seen in the background. Photo by Philippe Le Tellier/Paris Match via Getty Images. Copyright.

41 thoughts on “A Collection of 48 (Plus 1) Memorable Images from the Life of the 48th Imam of the Ismaili Muslims, His Highness the Aga Khan III”