Prayer Houses of Badakhshan, Tajikistan, Through the Lens of Muslim Harji 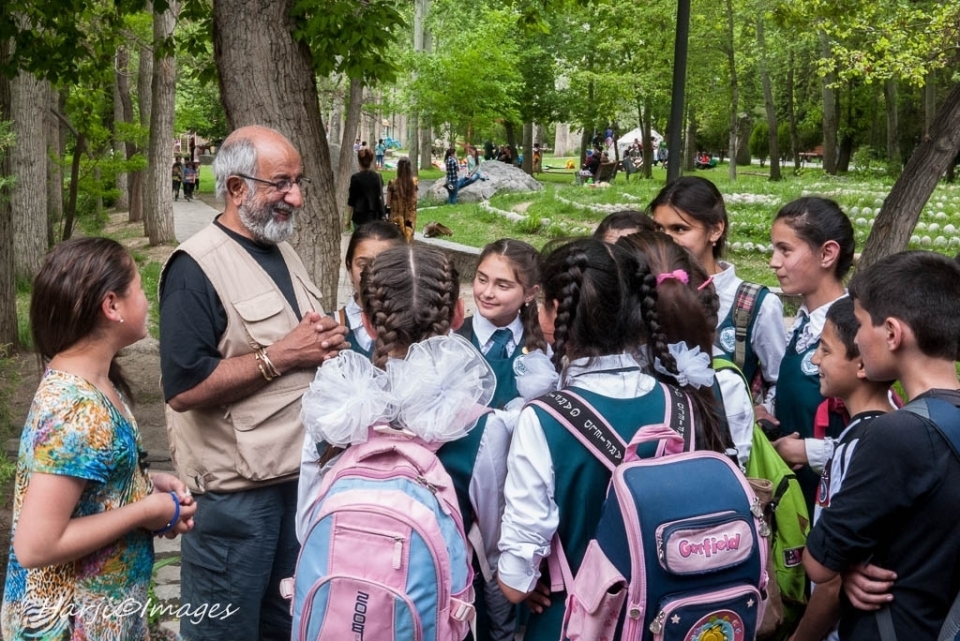 Editor’s note: Montreal’s Muslim Harji, pictured above with Ismaili students in Khorogh, continues his special series on Central Asia with this special feature on Ismaili prayer houses in Badakhshan. Thousands of readers have been inspired and touched by Muslim’s preceding photo essays. One reader wrote: “These Tajik brothers are an inspiration to all the rest of us…upholding the Ismaili tradition in the most harsh climatic and treacherous mountain terrain of our world. Thank you for sharing your incredible journey with us.” Readers new to this website may click on the following links to view Harji’s previous fabulous contributions on the Silk Roads and Central Asia. 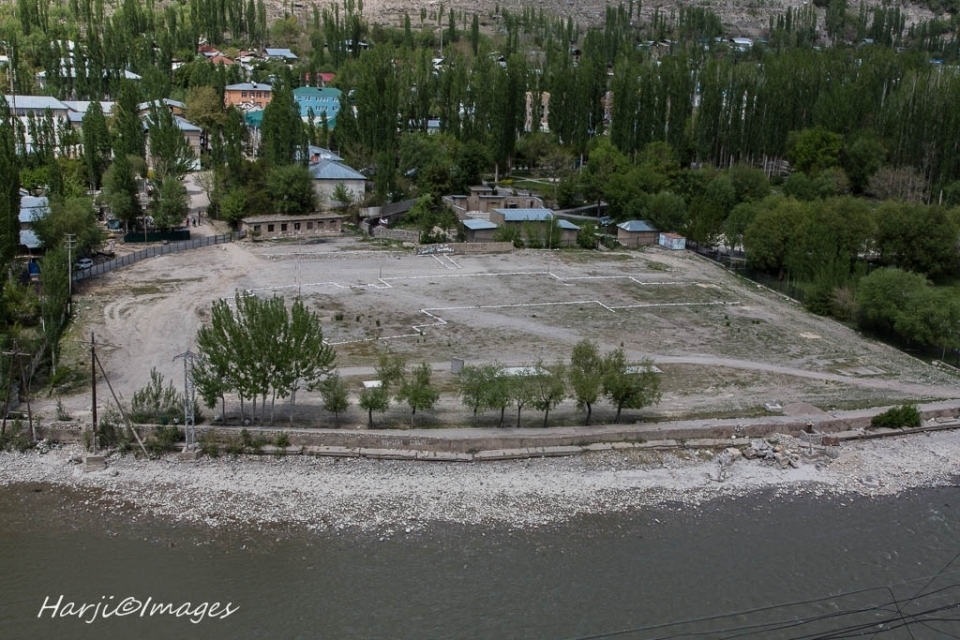 Khorogh (also Khorog) has one of the best educated populations of any town in Central Asia. English seems much more widely spoken here than in Dushanbe, Tajikistan’s capital. The open space in the image is the future site of “The Ismaili Centre Khorog,” next to the beautiful botanical garden built my Mawlana Hazar Imam, His Highness the Aga Khan. Photo: Muslim Harji. Copyright.

Badakhshan is dotted with Ismaili prayer houses. Every town and village has a prayer house, either as a free standing Pamiri house, a designated room in a Pamir home, or a quasi-commercial building where members of the jamat congregate to say the morning and evening prayers. As was noted by Dr. Ali Muhammad Rajput in his fantastic photo essay, see Photo Gallery: Ismaili Portraits From Tajikistan (I), there were only a couple of officially registered jamatkhanas in Tajikistan. The country requires that official places of worship be registered according to specific guidelines. The prayer houses should not therefore be construed as official jamatkhanas but rather as spaces that are used by members of the jamat to meet for prayers as well as to engage in social activities. However, it is not uncommon for many Ismailis in the Pamirs to refer to these houses as jamotkhanas for lack of a better term. 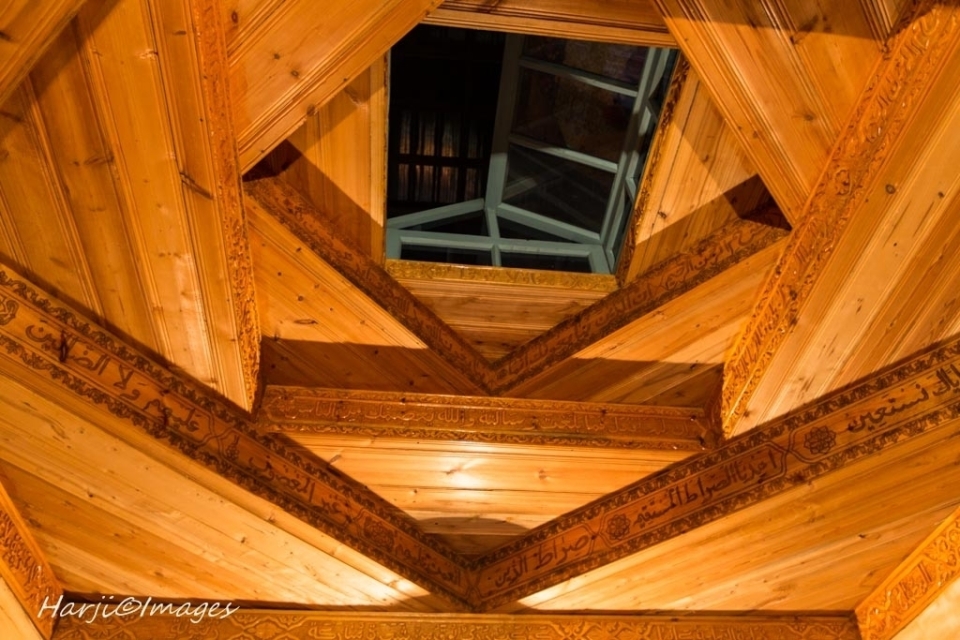 The symbolism of specific structural features of the Pamiri house goes back over two and a half thousand years and its distinctive architectural elements are found in buildings in several other areas close to the Pamirs. What to the untrained eye looks like a very basic — even primitive — structure, is, for the people who live in it, rich in religious and philosophical meaning. Tajik writers consider that it embodies elements of ancient Aryan and possibly Buddhist philosophy — some of which have since been assimilated into Pamiri traditions. Photo: Muslim Harji. Copyright. Caption material from article in Eurasia Travel “Symbolism in the Pamiri House” by Robert Middleton 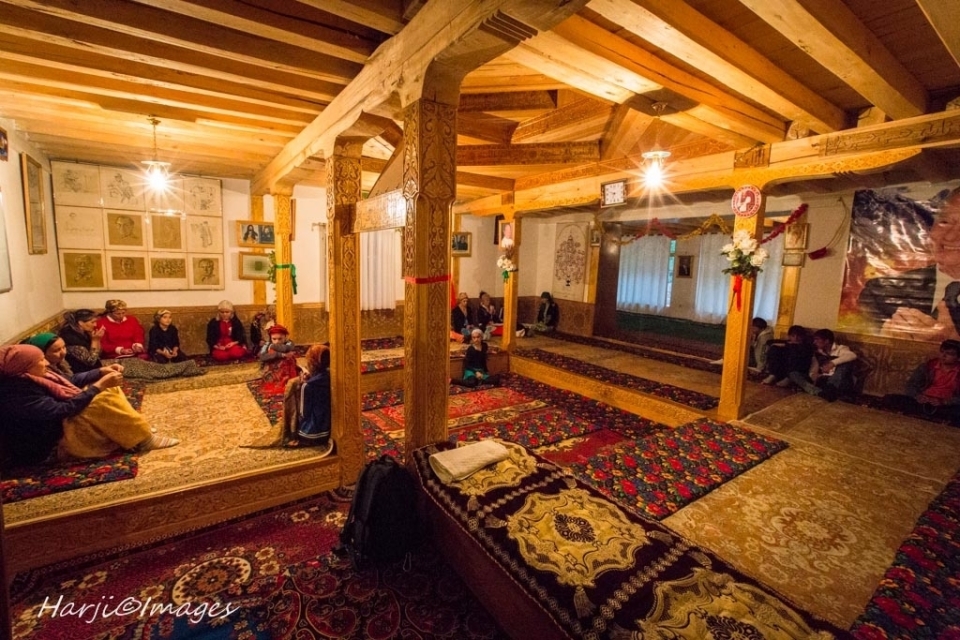 A typical Pamiri ceiling inside the prayer house at Dar-al-Noor in Khorogh, a cultural centre which Dr. Ali M. Rajput of Birmingham, England, helped to establish. Generally, Pamiri homes are considered as symbols of the universe and are used as places for private prayer and worship. A skylight, the design of which incorporates four concentric square box-type layers known as ‘chorkhona’ (four houses) representing, respectively, the four elements earth, water, air and fire, the latter being the highest, touched first by the sun’s rays. Photo: Muslim Harji. Copyright; Caption material from article in Eurasia Travel “Symbolism in the Pamiri House” by Robert Middleton. 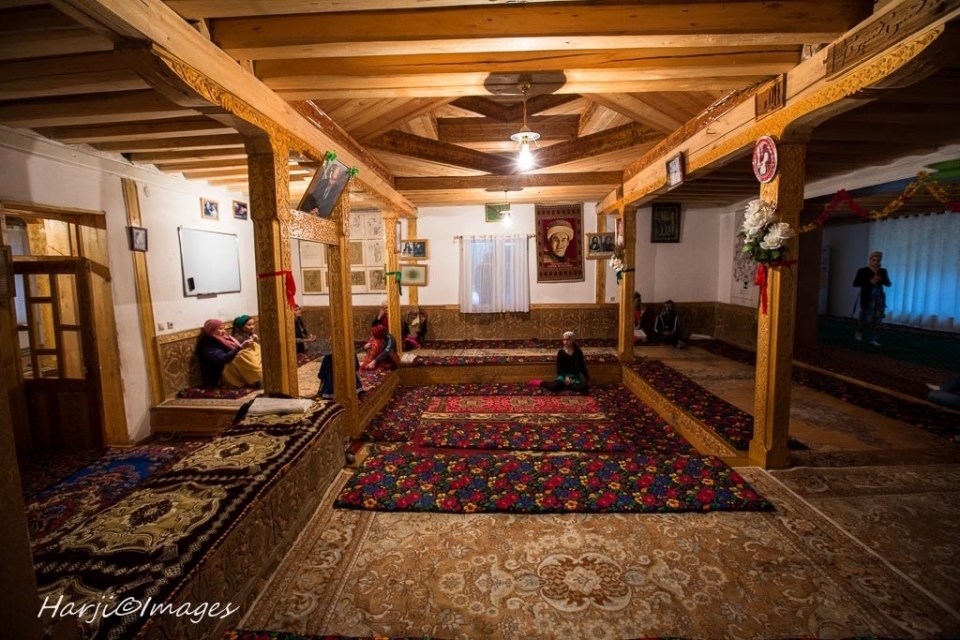 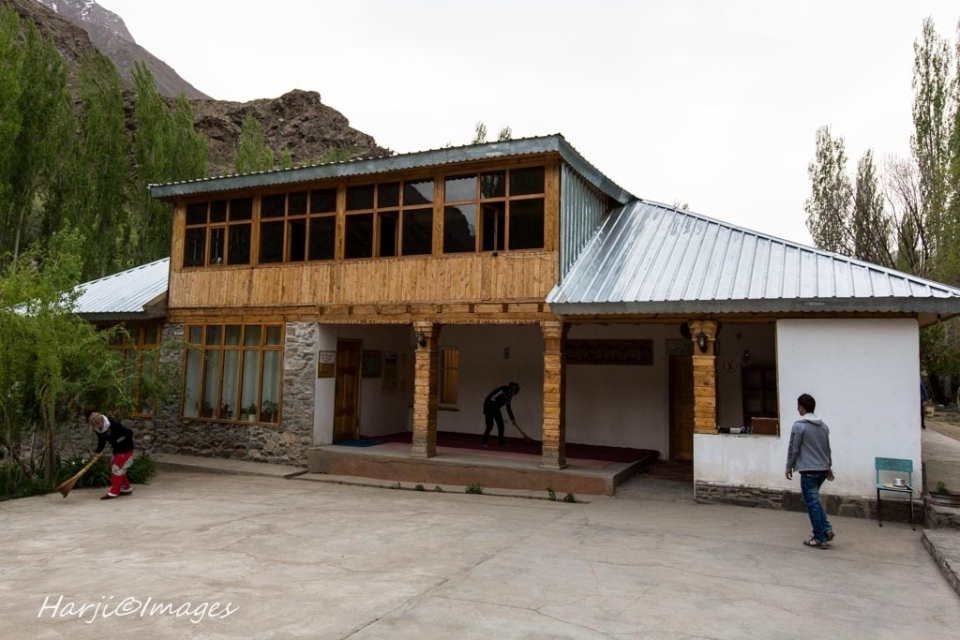 The exterior of the Dar-al-Noor, a cultural centre which Dr. Ali M. Rajput of Birmingham, England, helped to establish in Khorogh. The space inside, shown in the preceding photos as well as the next photo below is used for prayers and social activities. Photo: Muslim Harji. Copyright. 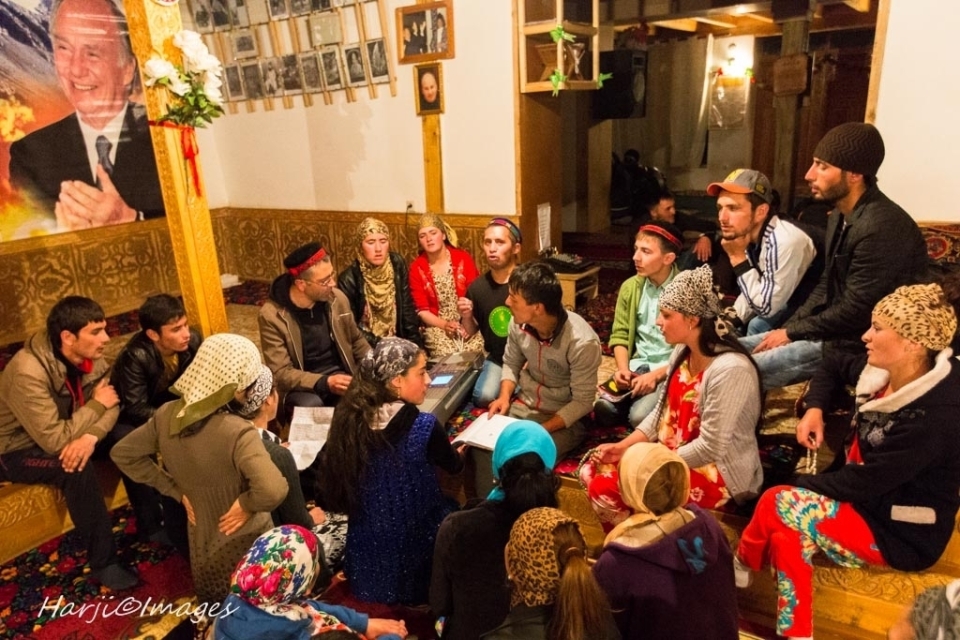 A section of the interior of the Dar-al-Noor in Khorogh which is used for prayers as well as social activities. Photo: Muslim Harji. Copyright. 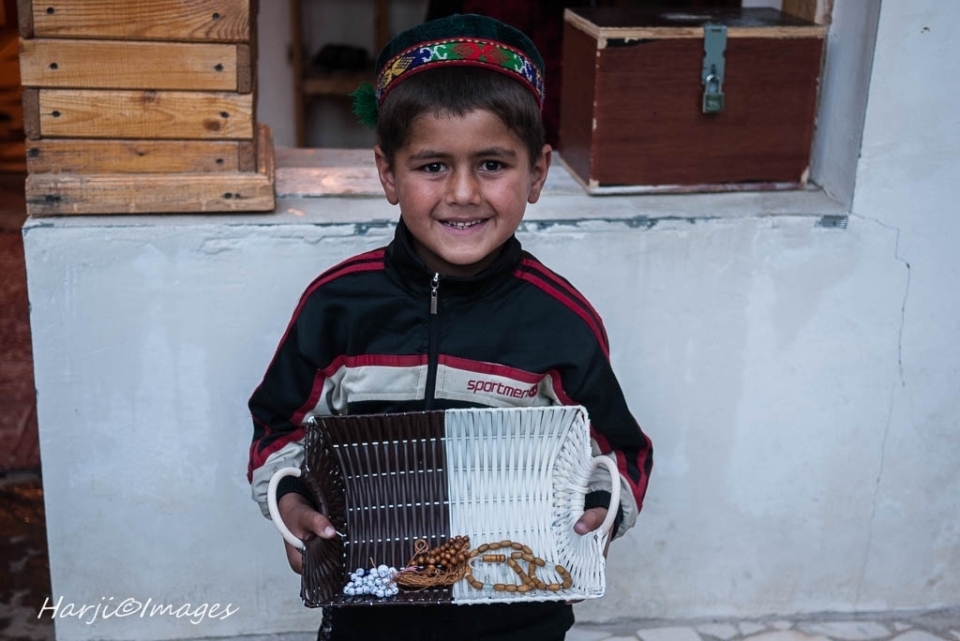 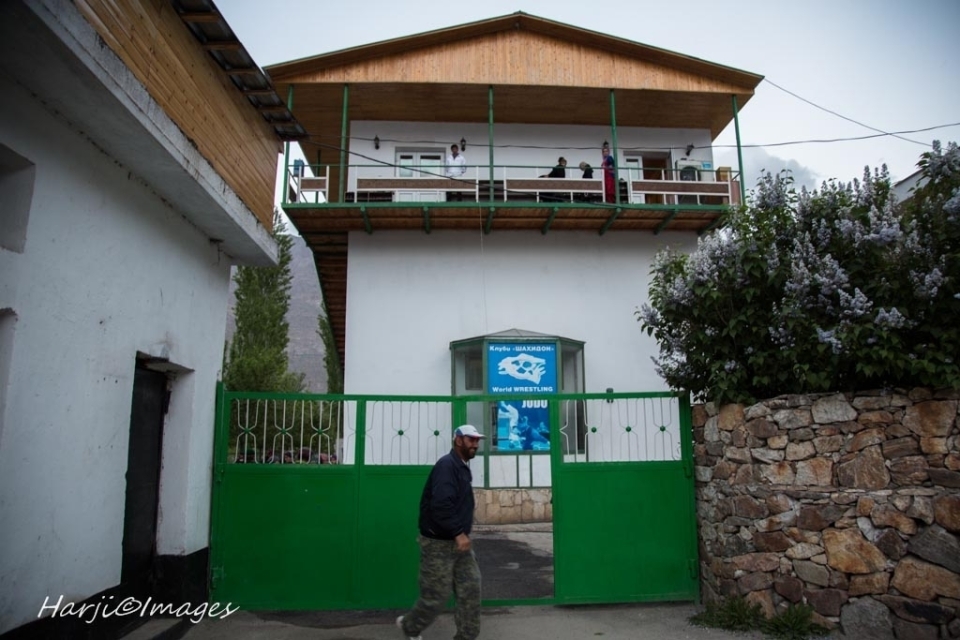 Many members of the jamat gather for prayers on the upper floor of this quasi-commercial building in Khorogh known as Imam nozor. There are two more prayers houses in Khorogh, which Harji was not able to visit. Photo: Muslim Harji. Copyright. 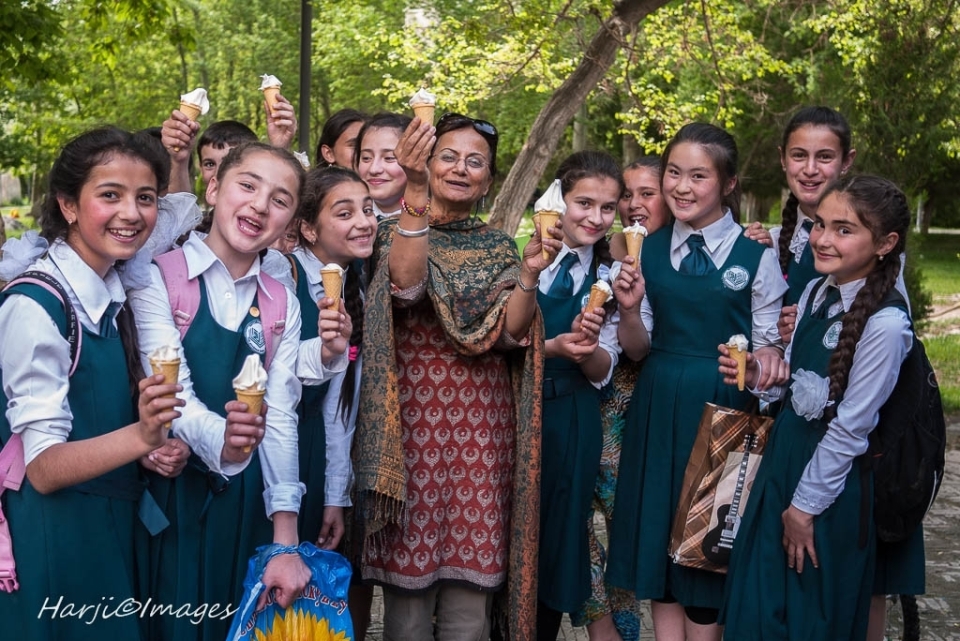 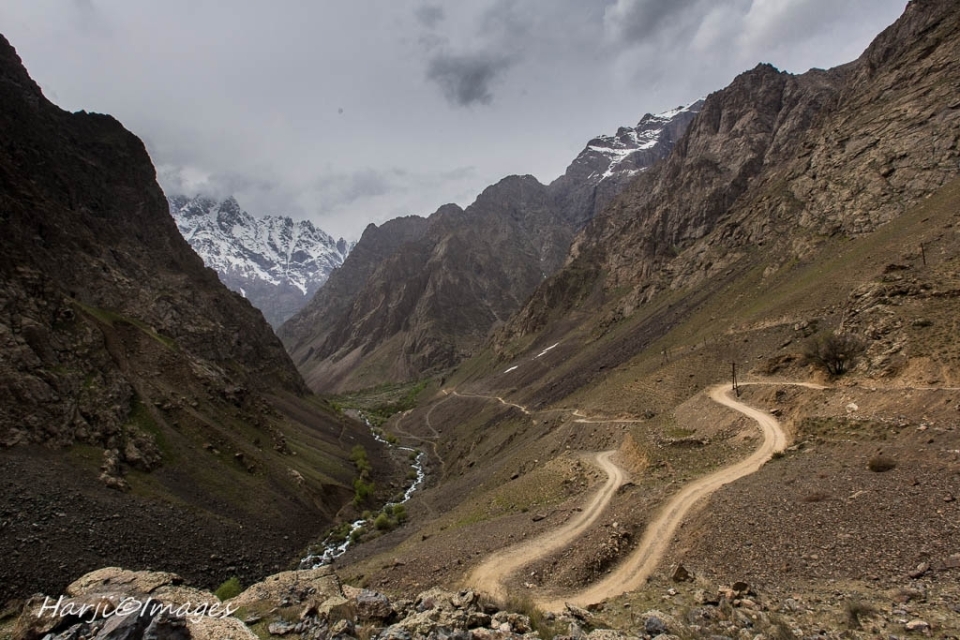 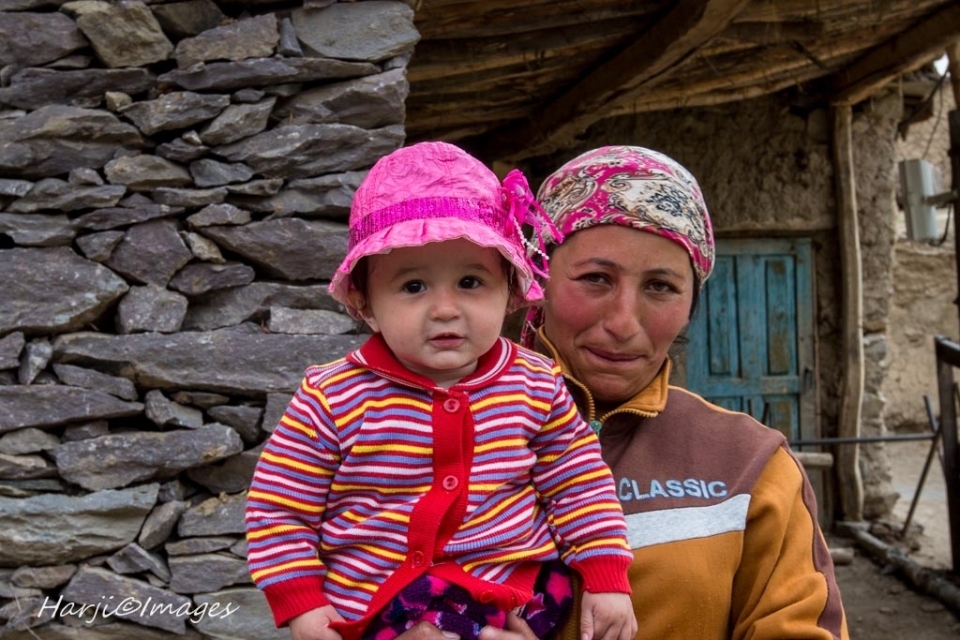 Ismailis of Rushan await the arrival of Muslim and Nevin Harji as well as the highly respected and much admired Dr. Ali M. Rajput. Photo: Muslim Harji. Copyright. 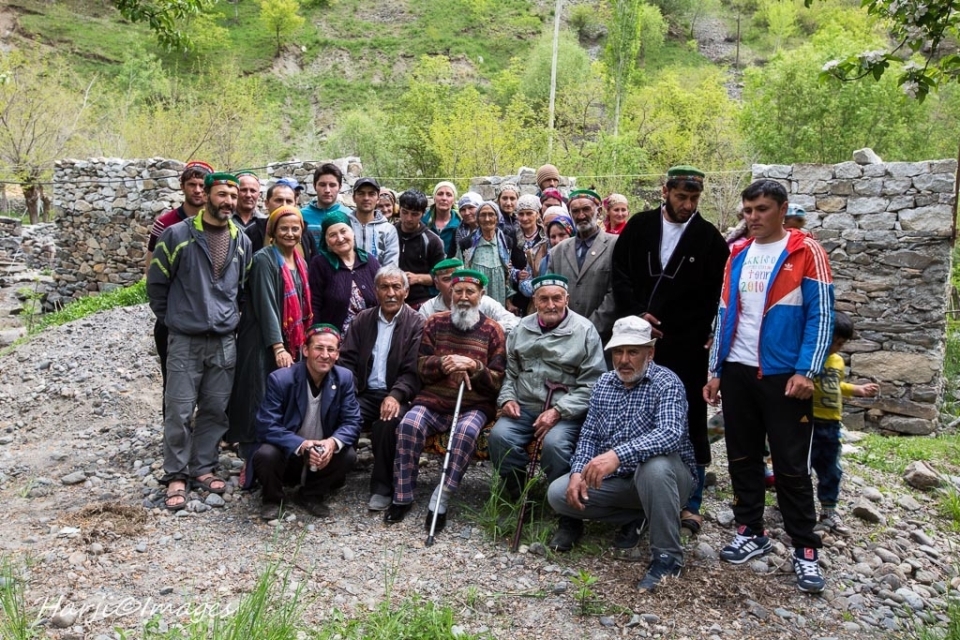 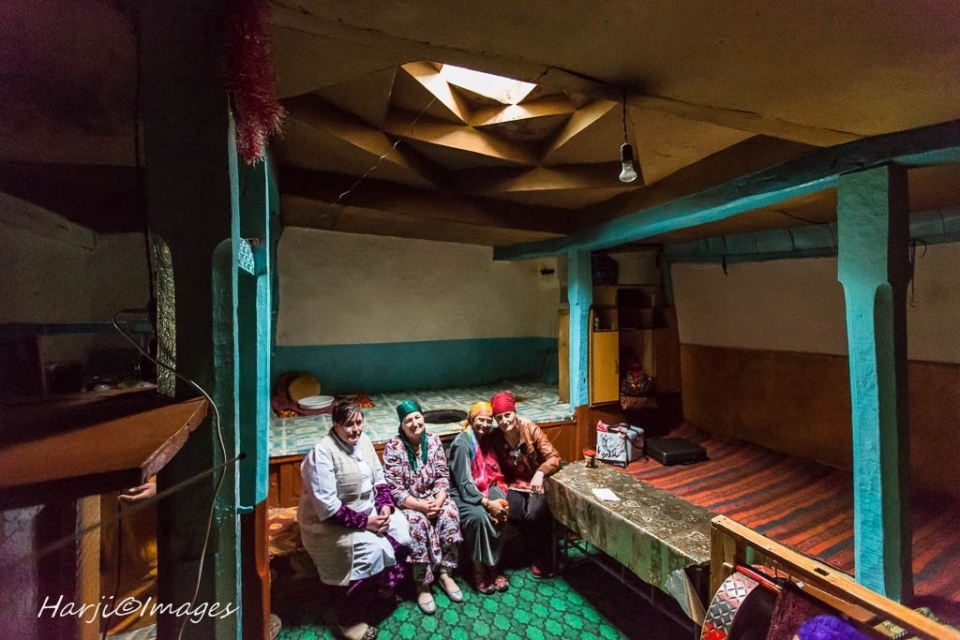 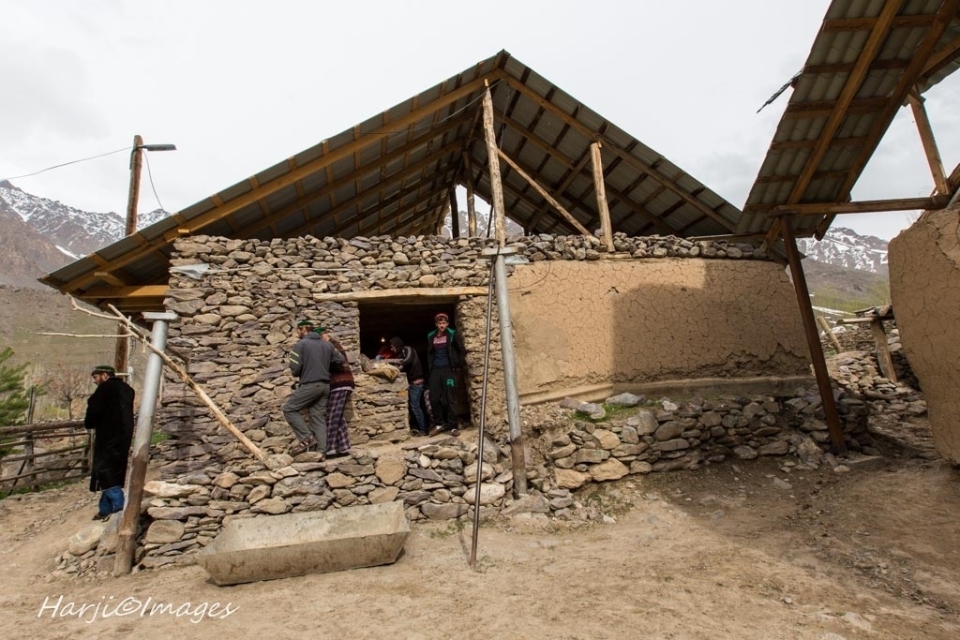 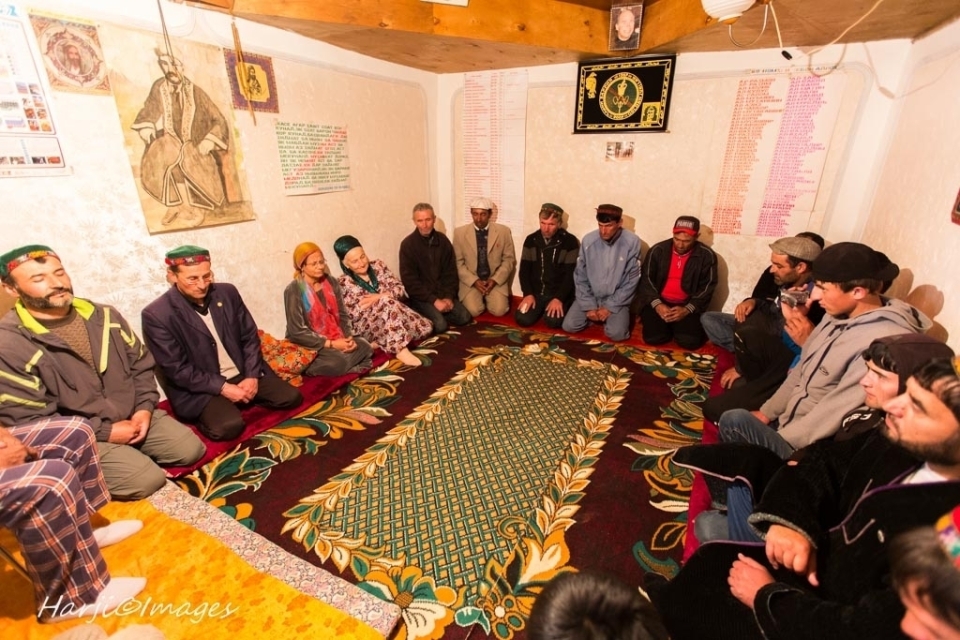 Inside a Rushan prayer house, which like other prayer spaces in the Pamirs, is adorned with photos and exhibits of Ismaili Imams, Ismaili historical figures as well as Ismaili history. Photo: Muslim Harji. Copyright. 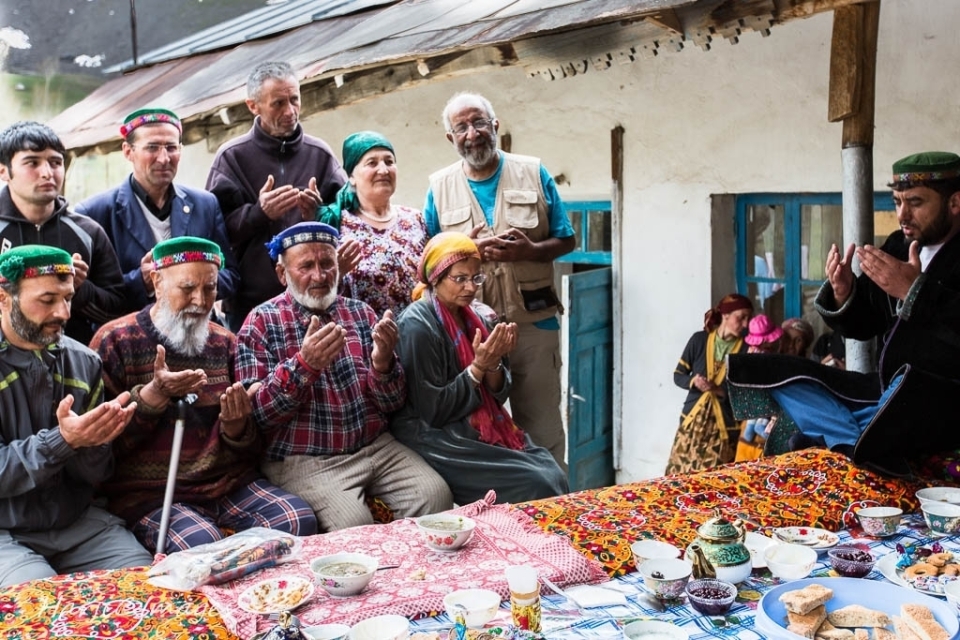 Dr. Ali Rajput, Muslim and Nevin Harji join in the recitation of grace with the Khalifa and village elders of Rushan district before breaking bread. Photo: Muslim Harji. Copyright. 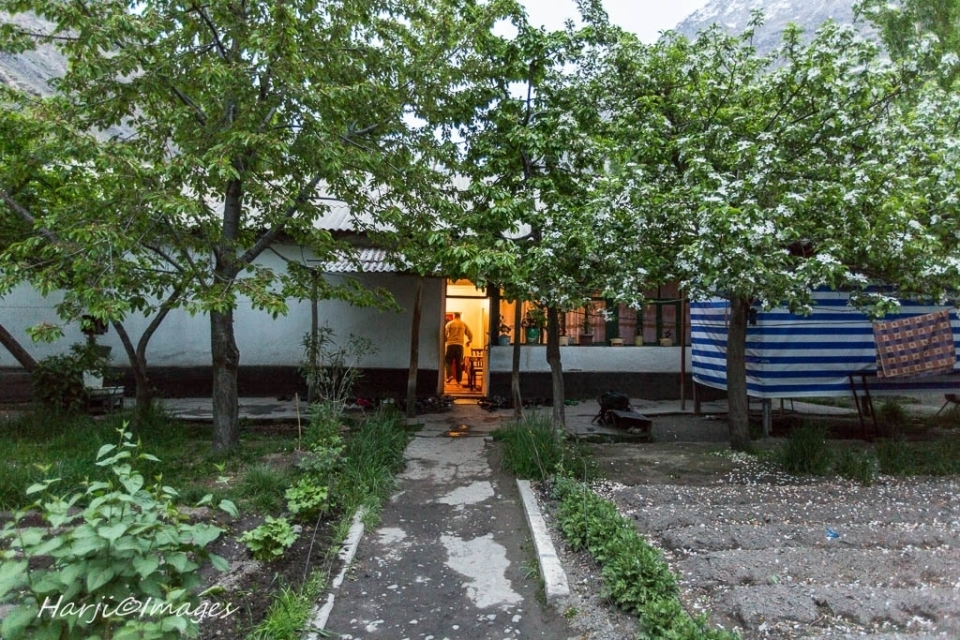 Exterior of a Pamiri home in the Rushan District which hosts a prayer room. Photo: Muslim Harji. Copyright. 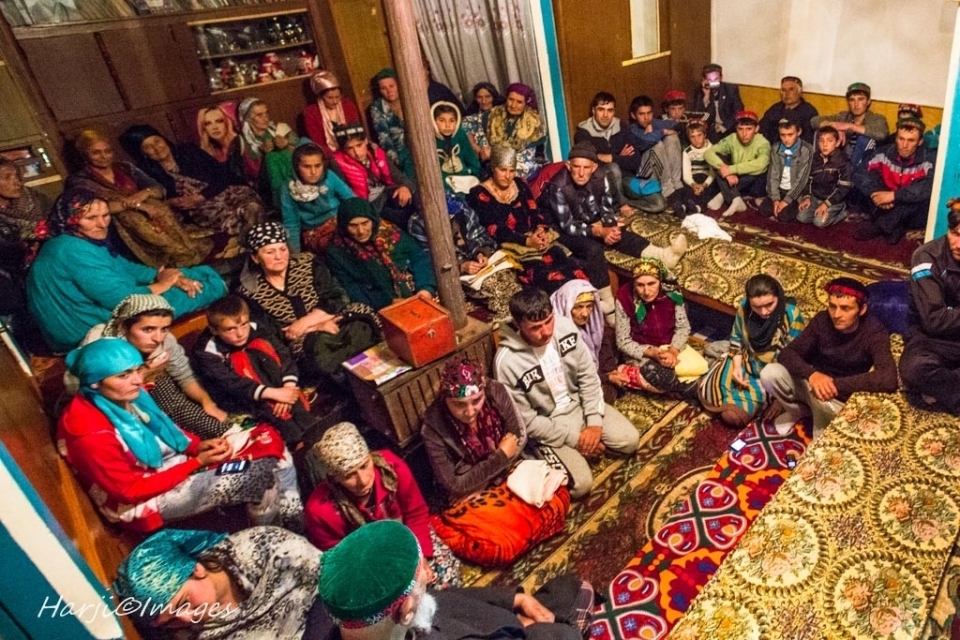 The prayer room in the Pamiri home in Rushan valley shown above. Photo: Muslim Harji. Copyright. 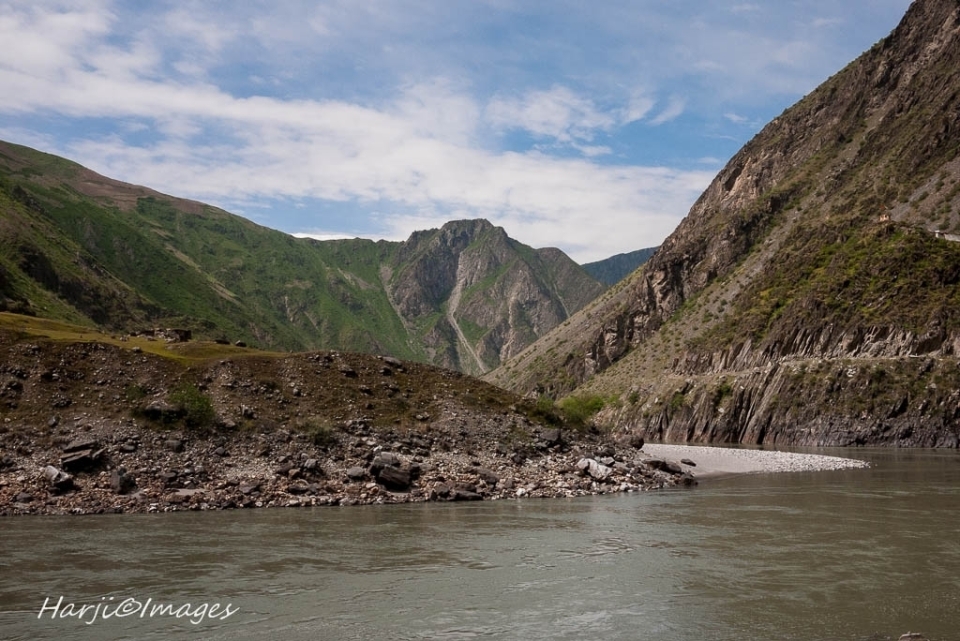 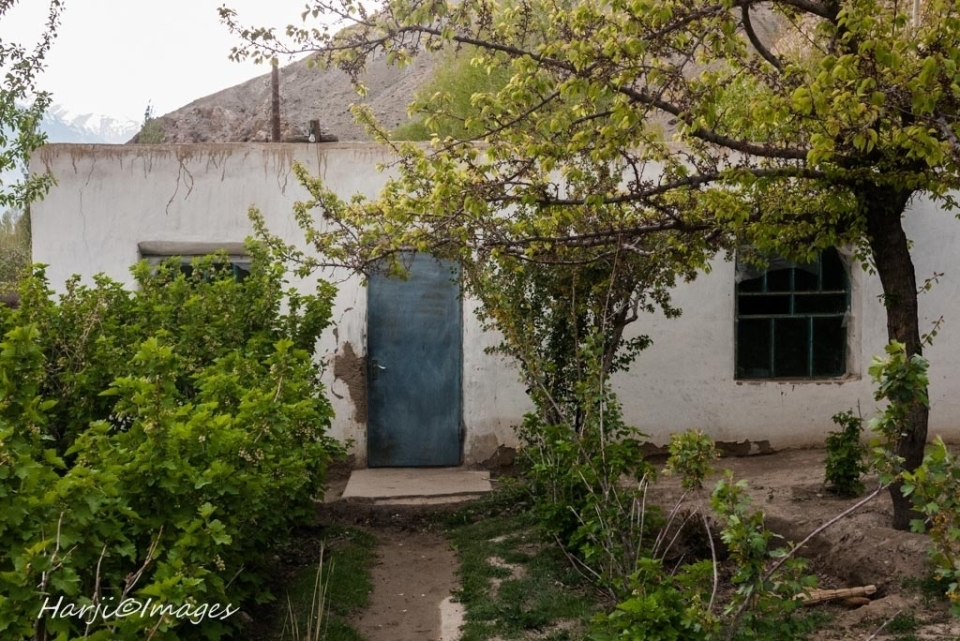 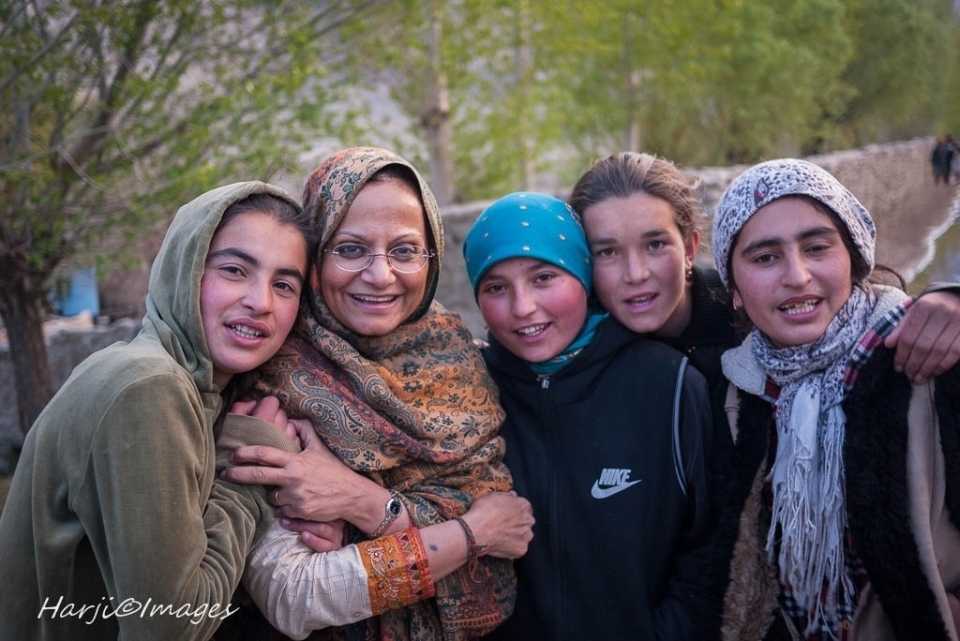 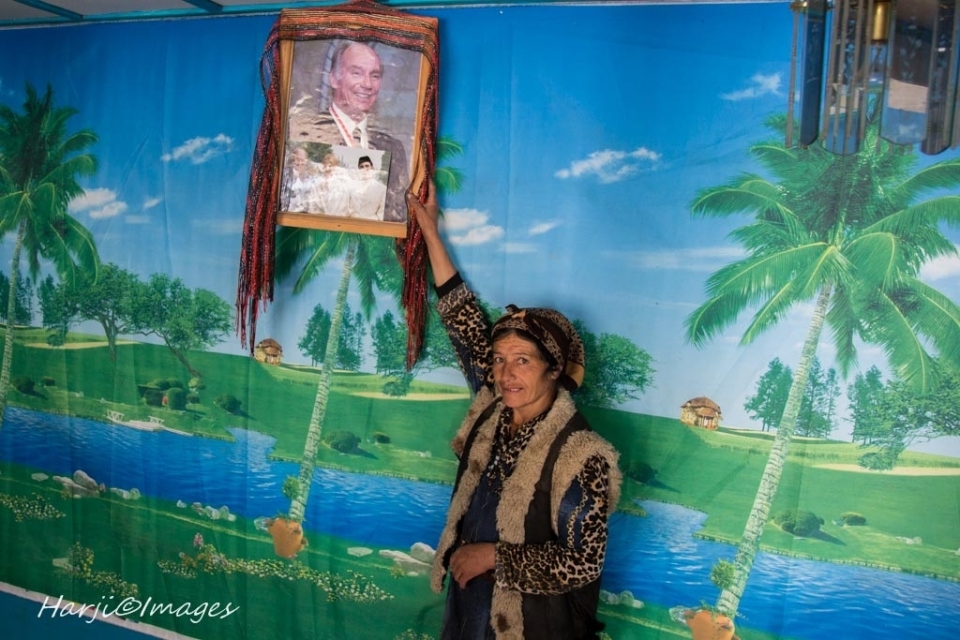 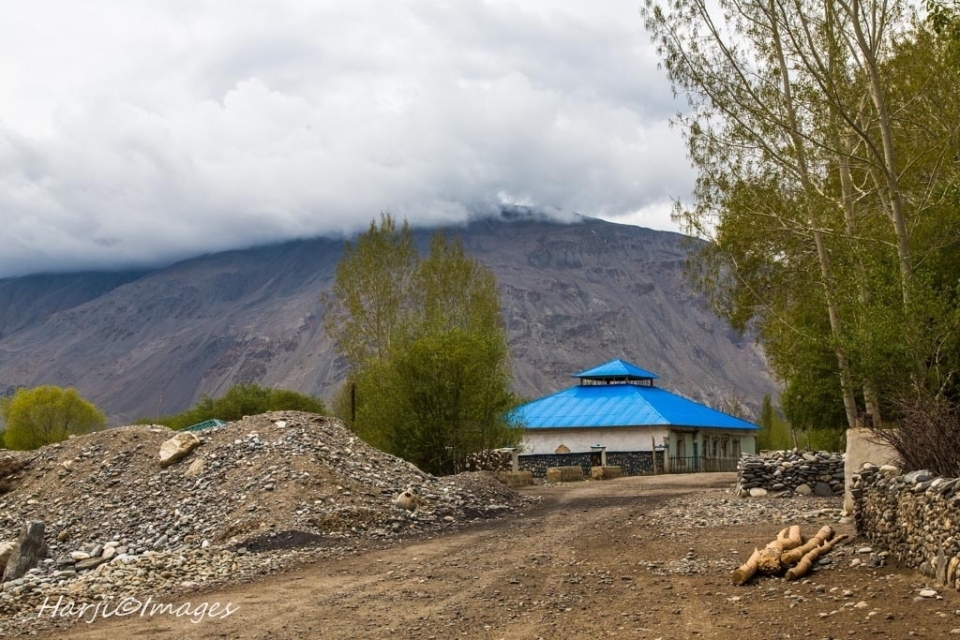 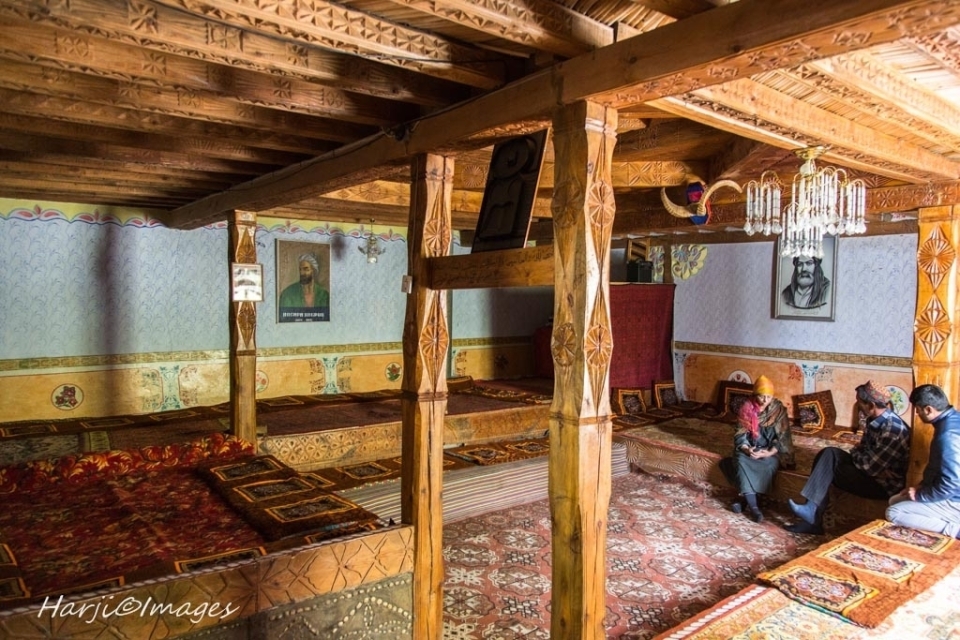 The interior of the prayer house in Langar, Wakhan Valley, which contains exhibits as well as photos of Ismaili historical figures. A portrait of Nasir Khusraw adorns the wall at the left. Seen hanging from the wooden ceiling at the far wall are horns from a species of a wild sheep (see enlargement below). Wild sheep and goats are abundantly found in the Pamirs. Local tradition has it that this particular set of antlers was gifted to Mawlana Hazar Imam, His Highness the Aga Khan, during his first mulaqat (visit) with the jamat of the Langar Valley in 1995. In response, the Imam asked the jamat to safekeep the unique gift. Photo: Muslim Harji. Copyright. 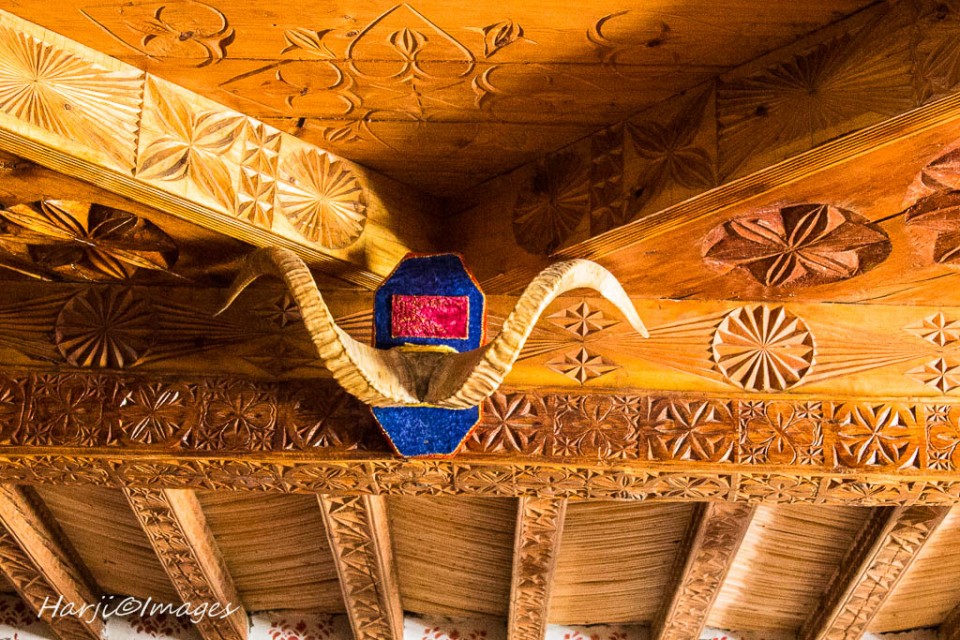 Spectacular horns from a species of Badakhshan’s wild sheep. Local traditions say that the antler was presented to Mawlana Hazar Imam during his first ever mulaqat with the Langar jamat in 1995, and that Hazar Imam had requested the jamat to safekeep the unique gift. Photo: Muslim Harji. Copyright. 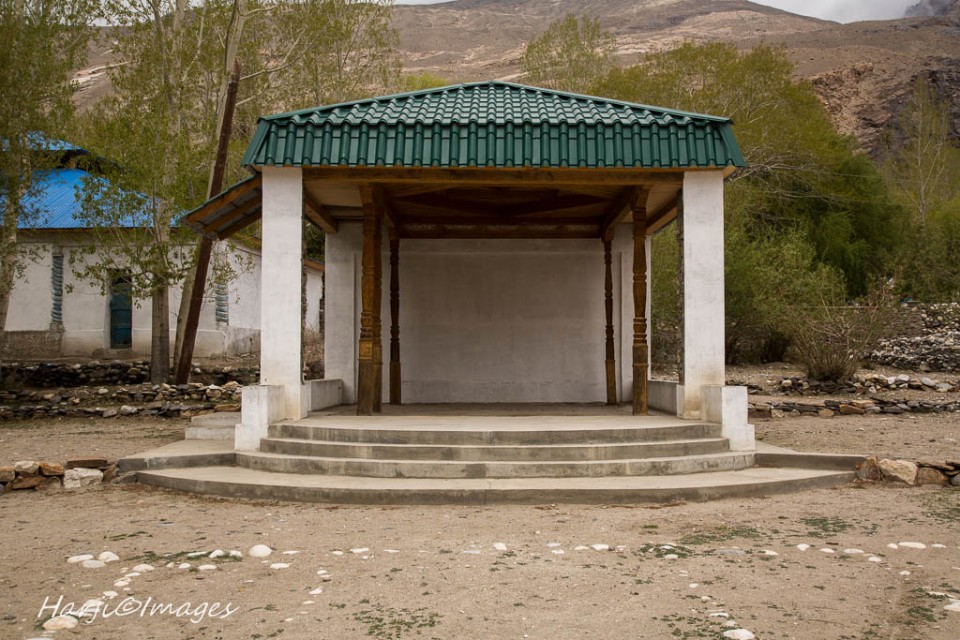 In 1995, Mawlana Hazar Imam, His Highness the Aga Khan, met with the jamats of Badakhshan for the first time. Langar was one of the places he visited. The photo above shows the stage which was set-up for Mawlana Hazar Imam for the mulaqat, adjacent to the prayer house that is shown in the preceding photos. The next photo, below, shows the space in front of the stage where murids had gathered to see their beloved 49th Imam. Photo: Muslim Harji. Copyright. 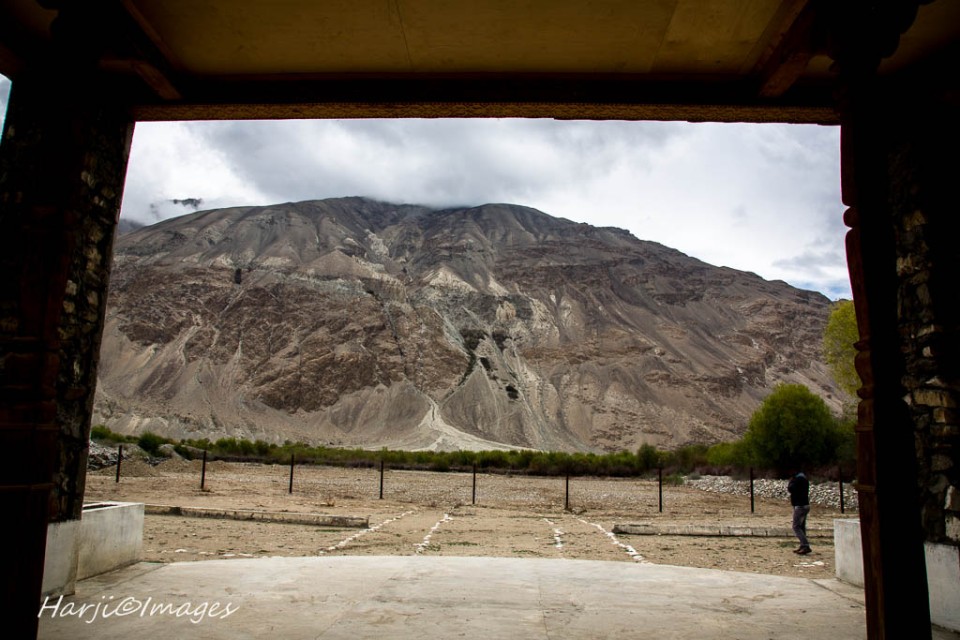 Looking out of the stage….the 1995 venue where Mawlana Hazar Imam gave a mulaqat to the Langar jamat in the Wakhan Corridor of Badakhshan. The mountains in the background are in Afghanistan. Badhakshan is a common region to both Tajikistan and Afghanistan. They are separated by the Panj River. Photo: Muslim Harji. Copyright.

Before departing this page please take a moment to visit Table of Contents for links to superb photo essays.

Simergphotos welcomes your feedback. Please complete the form shown below. Your letter may be edited for length and brevity, and is subject to moderation. We are unable to acknowledge unpublished letters. You may choose to remain anonymous – note your email address is never published or shared on the blog.

14 thoughts on “Prayer Houses of Badakhshan, Tajikistan, Through the Lens of Muslim Harji”