Letters and Photographs of His Highness the Aga Khan from the Family Archives of the Late Mr. Frank Pattrick

As publisher and editor of this photo blog, which has an emphasis on the Ismaili Muslim community, nothing is more gratifying than receiving for publication suitable material related to His Highness the Aga Khan, Mawlana Hazar Imam, which was hitherto largely unknown, but which was valuably preserved in family and individual archives around the world for several decades.

The latest example is that of the late Mr. Frank Pattrick whose niece, Ms. Linda Baxter of the United Kingdom, recently wrote to us and provided us with photographs, letters and interesting pieces of information concerning her uncle who served Mawlana Hazar Imam in Kenya during the 1960’s and beyond. She is currently trying to build a family tree which she hopes will also include details about her beloved uncle’s association with the work of Mawlana Hazar Imam. Ms. Baxter sent us a collection of photographs and letters of Mawlana Hazar Imam that she thought would be of interest to us and wrote, “I have very fond memories of my uncle and aunt and he would be delighted that his collection will be shared.”

“After the war, Frank moved to Cape Town and his interest in printing meant a directorship in that business for many years before he returned to Southend-on-Sea (in Essex, England). He took up a job as a compositor with a local newspaper before emigrating to East Africa. Frank left England to take up a position with the Nation Newspaper in Nairobi. I believe he was a production manager and retired as Chairman for a company owned by the Aga Khan with whom he kept in touch until he died [1991].

“My uncle and aunt had an informal buffet luncheon and there are invitations and thank you letters of the visit in 1970. The pictures include my grandfather and aunts who were in their late 80s when they travelled to Kenya for the visit. In 1969, when my grandmother died, the Aga Khan sent a personal letter of condolence.

“My uncle retired to Cape Town in the early 1980s. Sadly, he returned to the UK after developing throat cancer and died a few years later in 1991. My aunt died in 2002 and I had the privilege to look after her.”

In conclusion, Ms. Baxter wrote the following to Simerg:

“Many thanks and I hope the photos will be of interest. One thing that really struck me from the letters from the Aga Khan was his humble concern over my grandmother’s death.”

Yes, indeed, the material from Ms. Baxter that we are publishing will be of great interest to all our readers. She sought out the right place to send the material to, and we thank her for making a truly extraordinary contribution to this website. 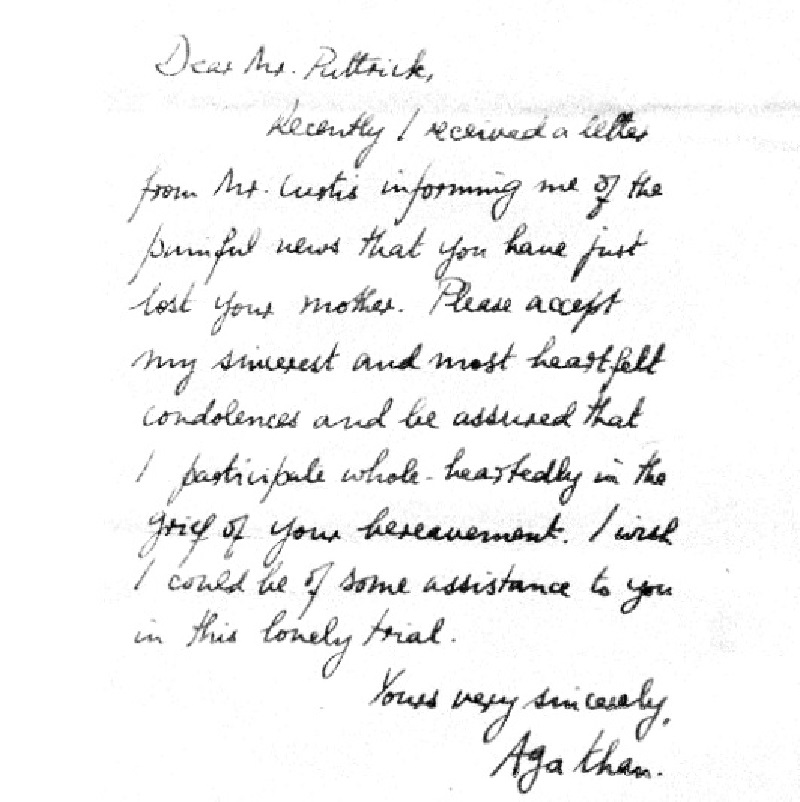 A condolence letter penned in 1969 by His Highness the Aga Khan to Mr. Frank Pattrick upon learning from Mr. Michael Curtis of the Daily Nation that his mother had passed away. Photo: Linda Baxter Collection, United Kingdom. (Note: Missing on this image on the top is the crest of the Imamat as well as the date of letter. The original letter includes the missing information – ed.).

Recently I received a letter from Mr. Curtis informing me of the painful news that you have just lost your mother. Please accept my sincerest and most heartfelt condolences and be assured that I participate whole-heartedly in the grief of your bereavement. I wish I could be of some assistance to you in this lonely trial.

His Highness the Aga Khan being entertained by Mr. and Mrs. Frank Pattrick during one of his visits to Kenya. Photo: Linda Baxter Collection, United Kingdom. 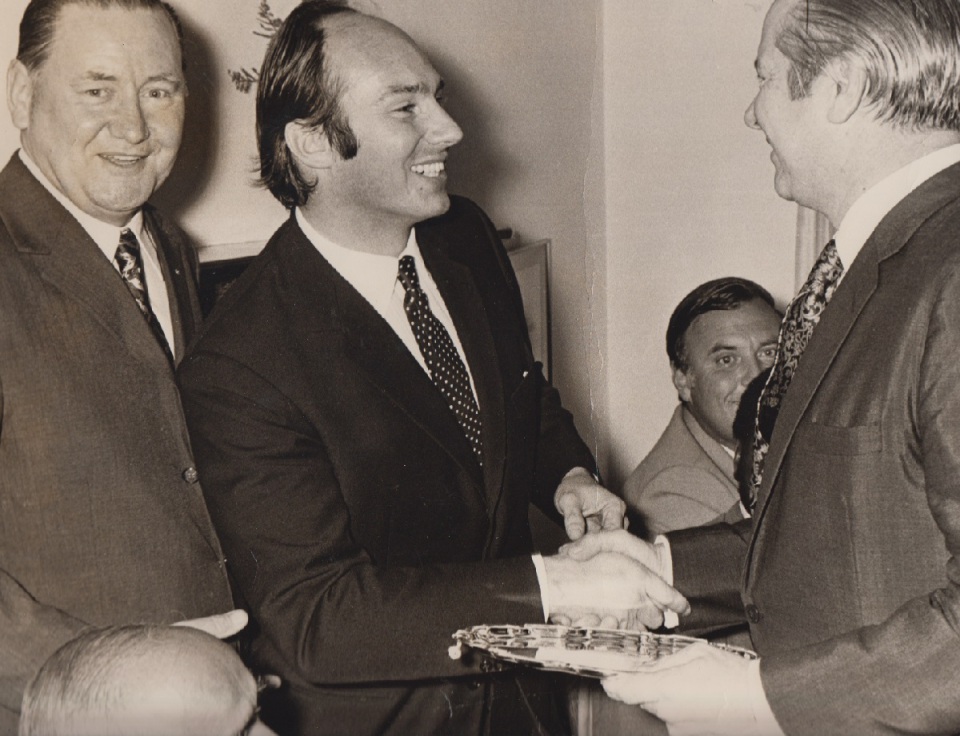 A delightful photograph of His Highness the Aga Khan as he is entertained to a lunch at the house of Mr. Frank Pattrick and his wife Mrs. Doris Pattrick. Photo: Linda Baxter Collection, United Kingdom.

Portions from a 2 page thank you letter dated February 22, 1972 , personally penned by His Highness the Aga Khan from Kampala after his visit to Mr. Frank Pattrick’s house for lunch a week earlier. Photo: Linda Baxter Collection, United Kingdom.

TRANSCRIPT OF THANK YOU LETTER

Just a short note, in haste, to thank you, and Mrs. Pattrick, for the delicious and most enjoyable luncheon you gave me at your house last Wednesday. The food, as always, was delicious, the speeches were bang on the mark, and the occasion was from my selfish point of view everything I would have wanted. In fact it was a true Pattrick – EAN production: Perfect all the way!

Please thank Mrs. Pattrick most warmly on my behalf for a superb luncheon, and give my best regards to your father and aunts.

With warmest thanks and every warm wish. 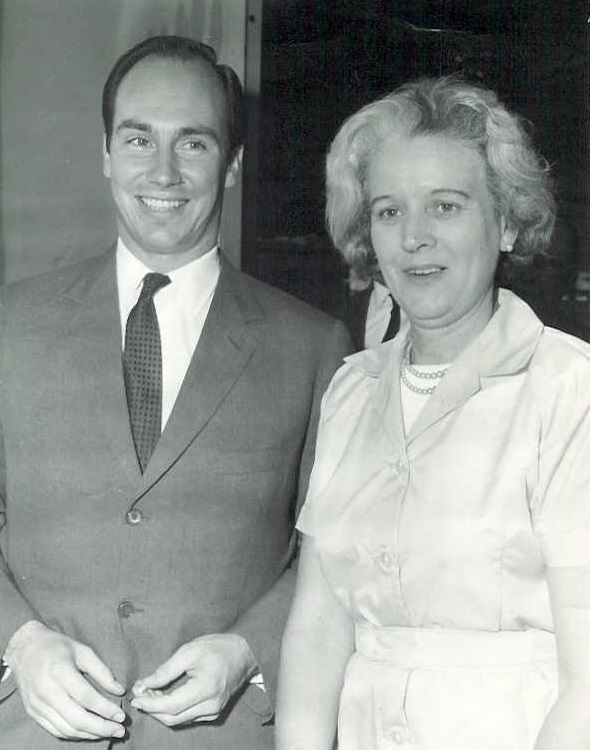 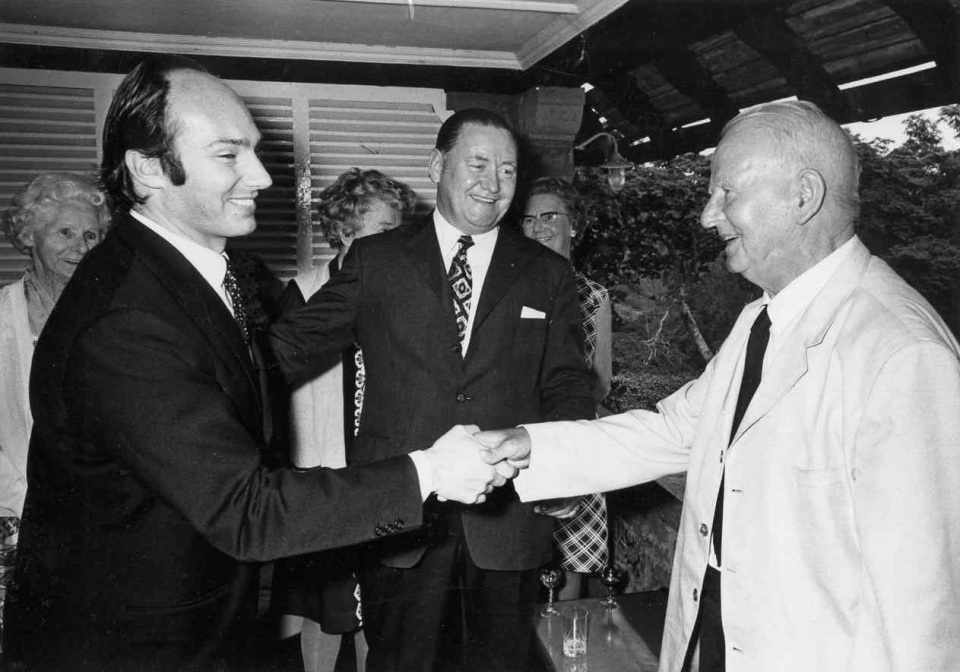 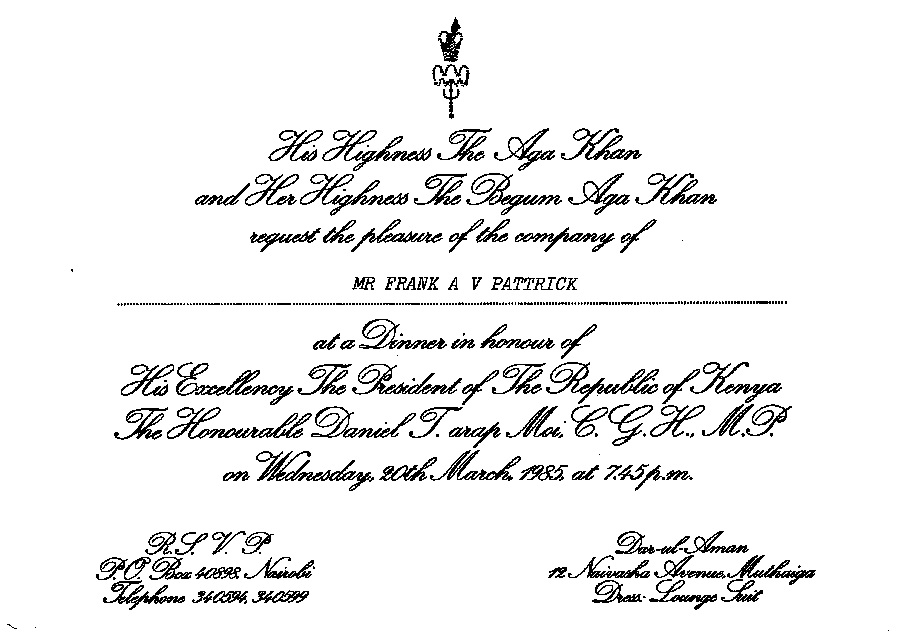 We welcome your feedback.

7 thoughts on “Letters and Photographs of His Highness the Aga Khan from the Family Archives of the Late Mr. Frank Pattrick”