On an occasional basis Simergphotos will publish an historical illustration which underlines an artistic, ethical, moral, religious or scientific theme. The following illustration was created/published in 1861, at just about the time the American Federal Goverment was making the abolition of slavery a Civil War goal. 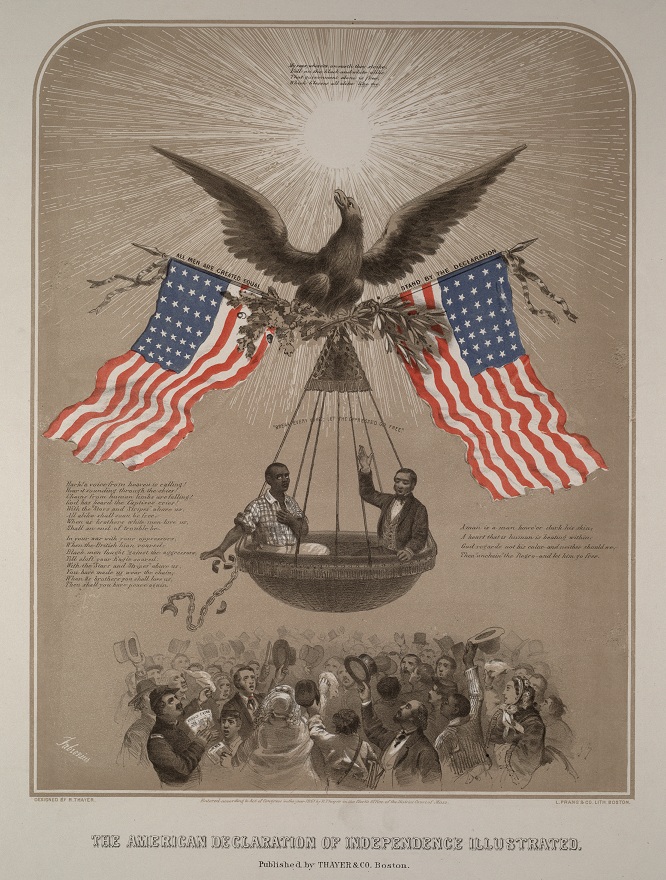 DESCRIPTION OF THE ILLUSTRATION

An idealistic call for emancipation of the slaves. Borne aloft by an eagle holding two American flags is an aerial carriage similar to the basket of a hot-air balloon with two occupants: a black man who is a freed slave, his broken shackles falling to the ground at left, and a white man who proclaims:

The eagle, like his counterpart on the arms of the United States, has wings spread and holds olive branches in his left talon. Here he also holds oak branches in his right. Above his head is a burst of light with the verses:

My rays, where’er on earth they strike,
Fall on the black and white alike;
That government alone is free,
Which blesses all alike like me.

The flags have the mottoes “All Men Are Created Equal” and “Stand by the Declaration.”

Below the carriage is a large crowd of people of all ages. Prominent are a Union soldier, a newsboy hawking the Boston “Herald” (left), and a free black man. Longer verses appear to the left and right of the carriage, espousing on moral and historical grounds the emancipation of the slaves. The two verses on the left read:

Hark! a voice from heaven is calling!
Hear it sounding through the skies!
Chains from human limbs are falling!
God has heard the Captives cries!
With the “Stars and Stripes“ above us,
All alike shall soon be free,
When as brothers white men love us,
Shall an end of trouble be.

In your war with your oppressors,
When the British Lion roared`,
Black men fought hard against the agressors;
Till aloft your Eagle soared:
With the “Stars and Stripes“ above us,
You have made us wear the chain,
When as brothers you shall love us,
Then shall you have peace again.

The shorter verse on the right reads:

A man is a man howe’er dark his skin,
A heart that is human is beating within,
God regards not his color–and neither should we,
Then “unchain“ the Negro–and let him go free.

Visit the Home Page for a summary and links to all the photo essays on this blog.

We welcome feedback/letters from our readers. Please use the LEAVE A REPLY box which appears below. Your feedback may be edited for length and brevity, and is subject to moderation. We are unable to acknowledge unpublished letters.

← A Tribute to President Barack Obama on His Re-election: Endearing Photos from the White House
Historical Images: President Thomas Jefferson’s Copy of the Qur’an →