Historical Photo Essay: The Ismaili Connection with the Town of Amir Pir in Sindh, Pakistan 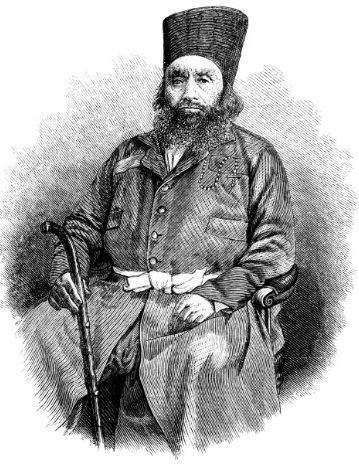 This vintage engraving depicts the portrait of Aga Khan I (1804 – 1881), the 46th Imam of the Nizari Shia Ismaili Ismaili Muslims. © iStockphoto.com

Amir Pir, a minor town with indefinite boundaries is located in the interior Sindh Province in Pakistan. It is situated on the banks of Kinjar (commonly known as Kalri) and Sonari lakes, and lies approximately 130 kilometres from Karachi. The Ismaili connection to the town of Amir Pir goes back more than 170 years, to the time when the 46th Ismaili Imam, Shah Hasan Ali Shah (Aga Khan I), was forced to leave Iran in 1840. He was accompanied on his eastbound journey by many of his faithful followers and Shiite soldiers. Upon the Imam’s arrival in Sindh, Sir Charles Napier, the then British governer, asked him to be stationed at nearby Jerruck with a mission to secure communications and restore peace between Karachi and Hyderabad. However, a certain Baluchi leader at the time, Mir Sher Muhammad Khan attacked Imam Hasan Ali Shah ‘s soldiers, and the Imam was forced to fight against overwhelming odds. In the skirmish, the Imam fell from his horse and was wounded, and transported to Hyderabad for treatment. 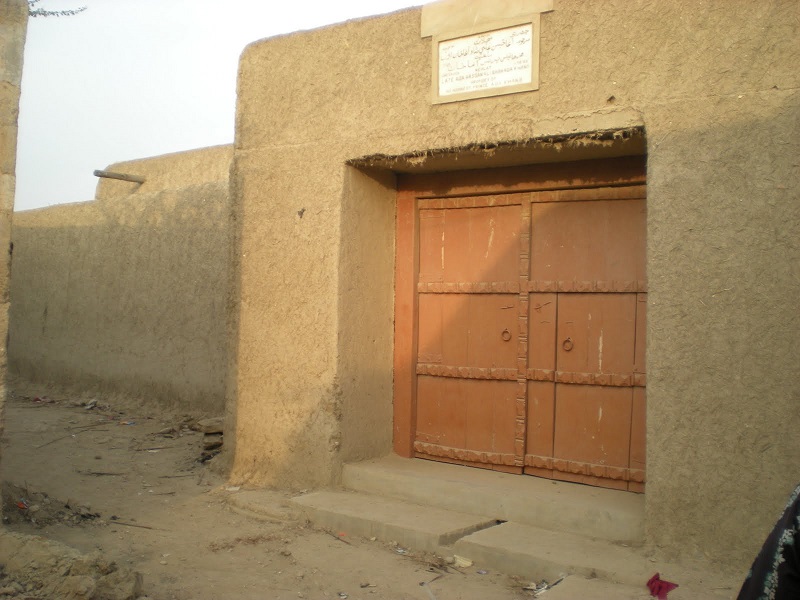 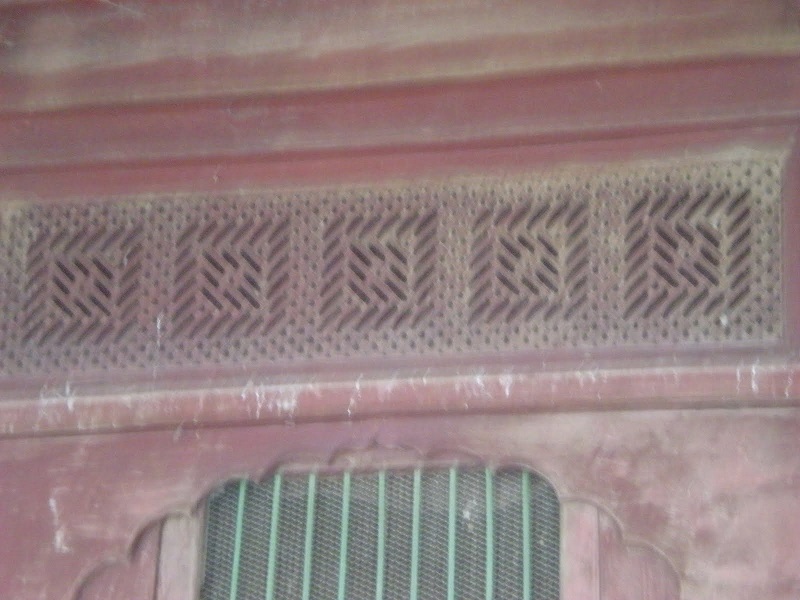 A wall inside the residence of Imam Shah Hasan Ali Shah

A close-up of the pillar shows the much-needed restorative work required on this important historical site – once the residence of the 46th Ismaili Imam, Shah Hasan Ali Shah, Aga Khan I 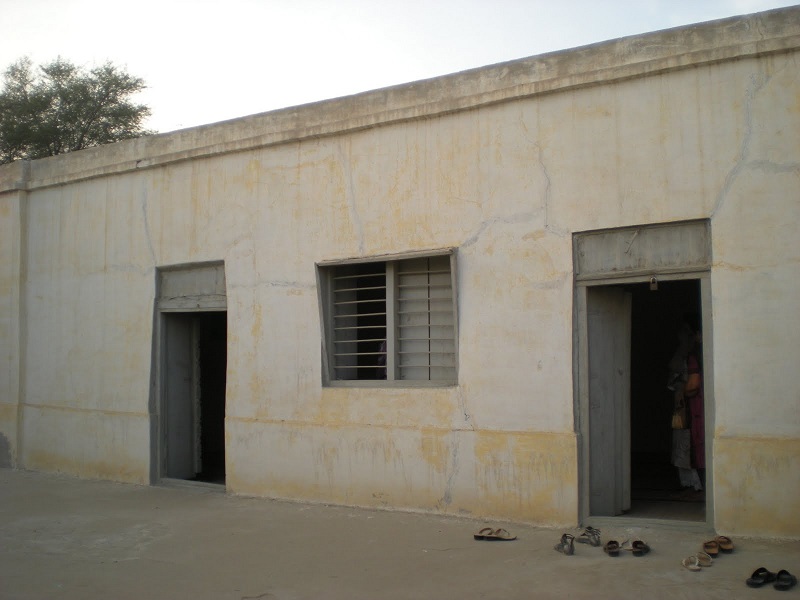 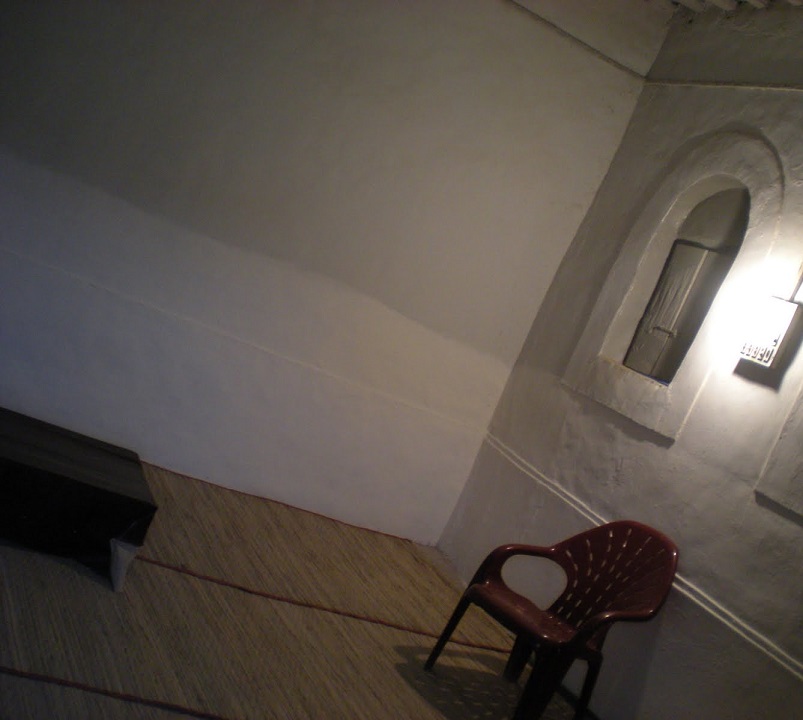 A section of the interior of Jerruck Jamatkhana, which is a few miles from the town of Amir Pir

Shah ja kadam and the Alam

Soon after the battle at Jerruck, while the Imam was still in Hyderabad, the Imam’s soldiers were attacked again by Baluchis between Jhimpir and Kotri. In the ensuing battle there were fatalities and casualties among the Imam’s troops, and the dead were buried at a location around Amir Pir.

When Imam Hasan Ali Shah returned to Jerruck from Hyderabad, he visited the location with his troops and followers. Crossing shallow waters of Sonari and Kinjar Lakes on his horse, he dismounted at the hilltop and offered fatiha at the gravesite of his loyal Shiite soldiers. His followers noticed the marks left by the Imam’s footprints, and built walls around these. These footprints are known as Shah ja Kadam and an alam (a standard) was placed there to commemorate his visit to Amir Pir.

The gateway to the historic spot where Imam Shah Hasan Ali Shah is said to have left his footprints (referred to as Shah ja Kadam). An alam (standard) of the Imam is seen above the opening. The walls around the area are embellished with pillars containing the crescent and the star. The alam is lifted up and an Ismaili flag is hoisted for the Amir Pir Mela (a fair/gathering) held each year in November. See more pictures of the alam below. 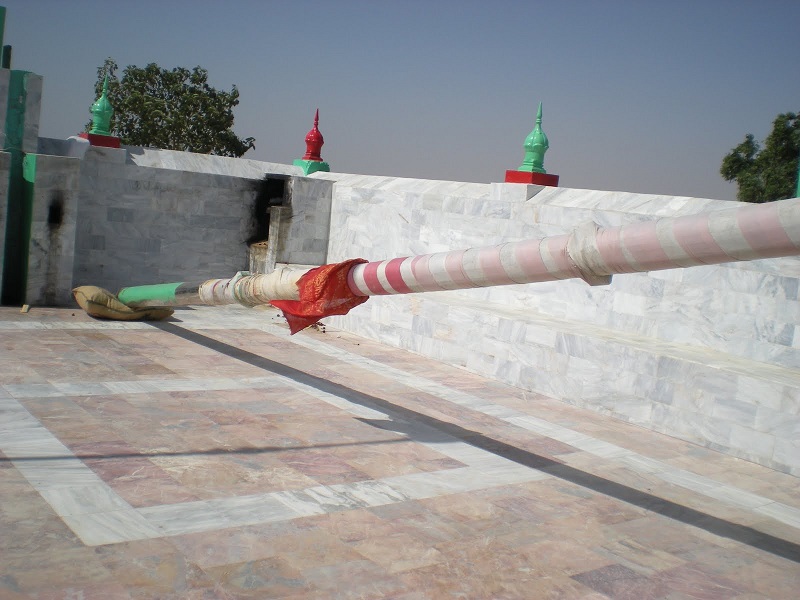 Interior photos of Amir Pir (above and below) 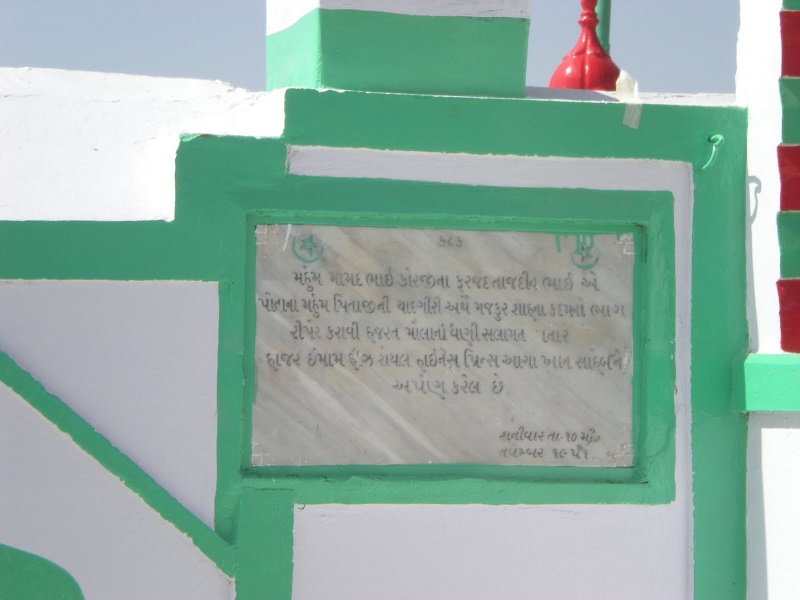 A November 1951 plaque in Gujarati recognizing the contribution made for repairs to Shah Ja Kadam by Tajdinbhai, in memory of his father Mohamadbhai Kurji.

The visit to Amir Pir brought satisfaction to Imam Shah Hasan Ali Shah. He found the climate suitable and decided to purchase the hilltop. On his return to Jerruck he announced to his Jamat from Muscat, Gwadar, Kutch and Gujarat that they should hold an annual gathering at this place, although by this time the Ismailis from Sindh had already begun a pilgrimage. The Imam intended such a gathering for scattered Ismailis to come together and to discuss and solve their social, matromonial and religious issues. This was the beginning of the Jhimpir Mela in 1851. However its name was formally changed to Amir Pir Mela (lit. a fair or a gathering). 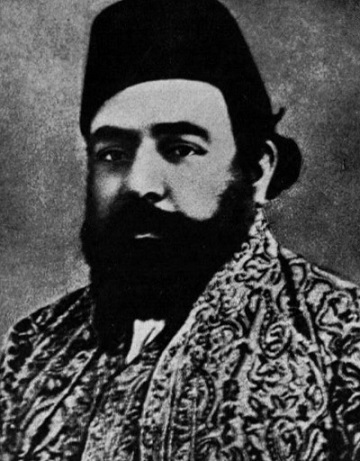 Imam Hasan Ali Shah’s son and successor to the throne of Imamat, Shah Ali Shah had often visited lower Sindh on hunting expeditions from Karachi paying homage to Amir Pir Mela, staying for days at his hilltop palace, which he commissioned to be built in 1853. The Aga Ali Shah Palace, as it is known, is built in colonial style. At its one side, a Jamatkhana was built in 1920, on the orders of the 48th Imam Sultan Mahomed Shah (1877-1957). The Old Majalis Hall existed before the present Jamat Khana, and near it, a dargah (shrine), where visiting Ismailis used to say their morning and evening dua still stands today 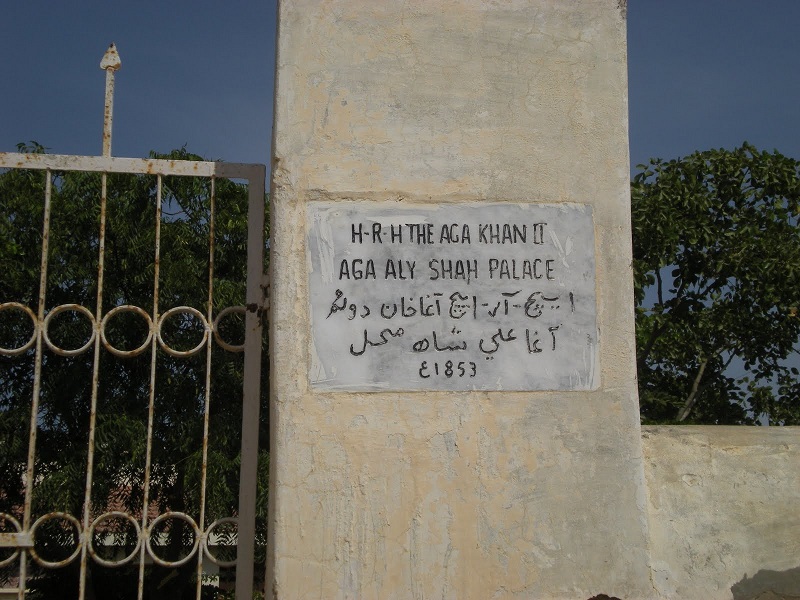 The exterior of the Old Majalis Hall

On route to the dargah, one often sees fakirs (Sufi ascetics) begging for money (bakshi) from passersby, a custom which is found in many historical sites worldwide to this day. There is no shrine (tomb) inside the dargah, but there is an opening to a cave where pilgrims recite the fatiha or pay their respects. It is a place where many come for a blessing of sorts and different observances are practiced. Many kiss various articles laid on and around inside the dargah. One enters the chamber in sitting position, and crawls forward through it. Before exiting the cave, they are given a sacred white thread, a piece of coconut and a shard of sugar (misri).

Tombs of seyeds inside the dargah

A cave like entrance in the dargah leads to a room of takhats (traditionally a takhat, a four-legged wooden seat, was used to symbolize a throne). One of the takhats in the room is shown below.

There are other practices that can be seen around the dargah to this day: newlyweds coming to untie the chera chori (a knot tied to the bride and groom’s wedding clothes) and hurl coins in the air; mothers bring their newborn babies here to tie on them a necklace made of white thread, and to have their first hair shave by barbers as good omen. Other reasons for coming to Amir Pir Mela include prayers for the recovery of the seriously ill. Tombs of sayeds/sayedas (revered men and women) covered with coloured sheets and topped with garlands also lie around the dargah.

The Amir Pir Mela is celebrated and rituals and festivities continue through the course of a month.

Walled courtyard next to the dargah where rituals takes place

In olden time people travelled by horse and cart, on camel, bullock cart and donkey cart. Later trains arrived at Jhimpir station, and people came carrying with them ‘everything but the kitchen sink’. Today visitors journey by coach, mini van or by car. In the 1880s, the old musafarkhana (hostel) was demolished and a new musafarkhana was built, most probably in the 1930s. Travelling pilgrims rented the hostel. A row of individual rooms (kotris) with a tiny bathroom, was available for those unable to rent space at the hostel. Rows of latrines (kakus) sit facing across, and are still in use, as is the hostel and kotris. But most families stayed in jute tents (boongas), which were either free of charge or rented for a few rupees. Today they have been replaced with small cottages.

There was no running water until 1996; instead, water was brought by sindhi water carriers from the lake, in earthen pitchers or cowhide bags. There were makedo dabhas – village cafe made from jute (gooni) similar to a hut – with wooden tables and benches (bankras) where people had breakfast, lunch and dinner. Chai huts played old songs at full volume, and remained open at all hours. Evening entertainment included ‘black and white’ Indian and Pakistani movies. The dhabas and chai huts have been replaced by more solid buildings and the old songs and black and white movies have given way to a modern genre (21st century). Children and adult alike still take a dip in the lake and, over the decades, many have lost their lives therein. Boating in the evening is usual on Kinjar Lake during the Mela. Colorful market stalls sell sweetmeats (methi)and savoury snacks(chat/samboosa) and for those who preferred to cook for their own families, food provisions could also be bought locally. Local sindhi people come as their forbearers did before them, to sell their fresh milk, butter, fish and meat, from farms around Amir Pir. One also finds hundreds of souvenirs to take home, such as sindhi pottery and dolls, ajrak chadar, susi cloth, sindhi arts and crafts sold by the local sindhi people a couple of miles away from Amir Pir. 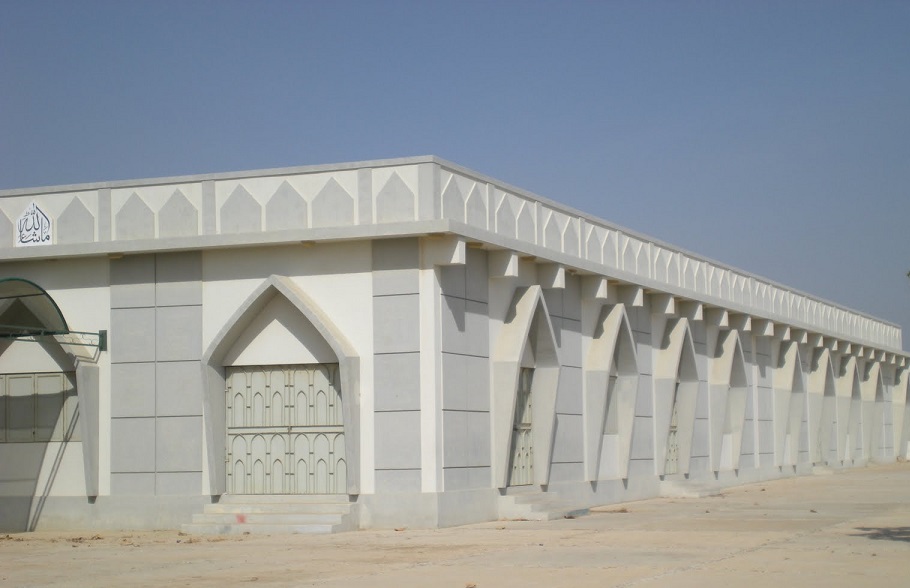 The new hall where the jamat is served lunch consisting of Biryani, zarda and katchumbar

On the second last day of Amir Pir Mela Mela, a deg ( food made for hundreds in huge steel pots) was served at lunchtime in Jamatkhana; it consisted of Biryani, Zarda & Katchumbar. Today deg is served in a dining hall.

Amir Pir has been renovated several time over the years and there now is running water for drinking and other usage as well as the use of electricity and gas. The rituals are probably just as strong as they were once for some people, but for others it is simply “getting away from it all” even for a day trip or for a picnic.

Profile of Gulshan Chunara at Contributors.

For a complete list as well as links to photo essays published on this blog please  click on Table of Contents or visit the Home Page.

37 thoughts on “Historical Photo Essay: The Ismaili Connection with the Town of Amir Pir in Sindh, Pakistan”