Islam and the Muslim World: An Interesting Collection of Prints, Photographs and Images at the US Library of Congress

I. THE ROTUNDA: GREAT CONTRIBUTIONS TO CIVILIZATION

A photo of the dome of rotunda at the USA Library of Congress. The mural acknowledges countries which have contributed to the development of civilization including, Judea for religion, Greece for philosophy, Rome for administration and Islam for physics. Created by artist Blashfield, Edwin Howland Blashfield (1848-1936) between 1896 and 1900?. Credit: Library of Congress.

His Highness the Aga Khan

A portrait of the 48th Ismaili Imam, His Highness the Aga Khan. Credit: Library of Congress.

British propaganda poster intended for Chinese Muslim audience. Poster shows portrait of Imperial Governor Schnee, copy of a letter by him, in German, directing the suppression of Islam in Africa, and two photographs of Fort Mosi (Moshi, Tanzania?) where the letter was found by the British. The Chinese text of the poster explains the anti-Islamic activities of the Germans. Date created: 1918. Credit/Repository: Repository: Library of Congress Prints and Photographs Division Washington, D.C. 20540 USA 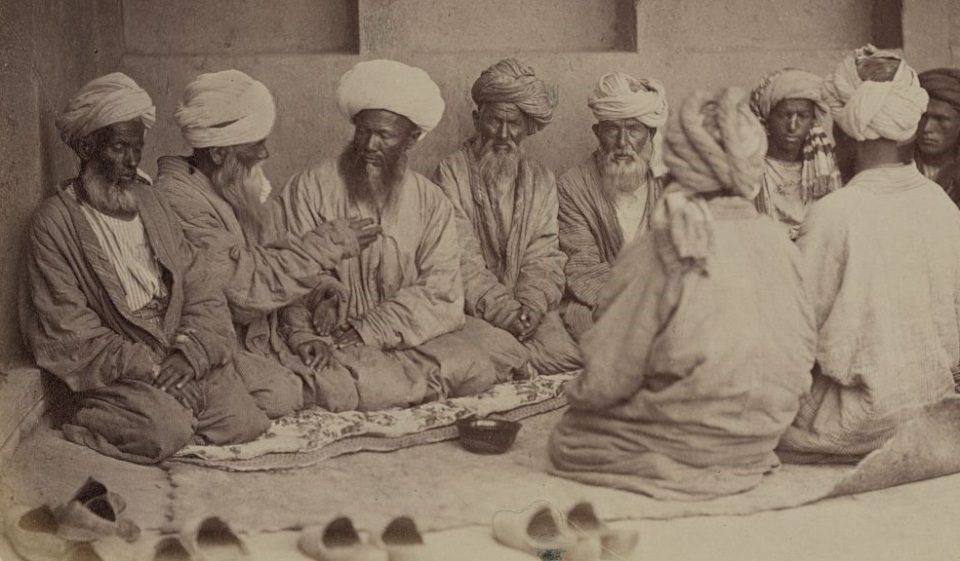 Photograph shows a group of men seated on the ground as part of rituals at a Tajik wedding. Date created/published between 1865 and 1872. Credit/Repository: Repository: Library of Congress Prints and Photographs Division Washington, D.C. 20540 USA

The images preserved in the extensive Turkestanskii Albom are both intrinsically sublime and useful to scholars. Khimet-Ai, a gracious Uzbek woman of obvious wealth, poses for the camera’s approving lens. Photo: Library of Congress, USA. 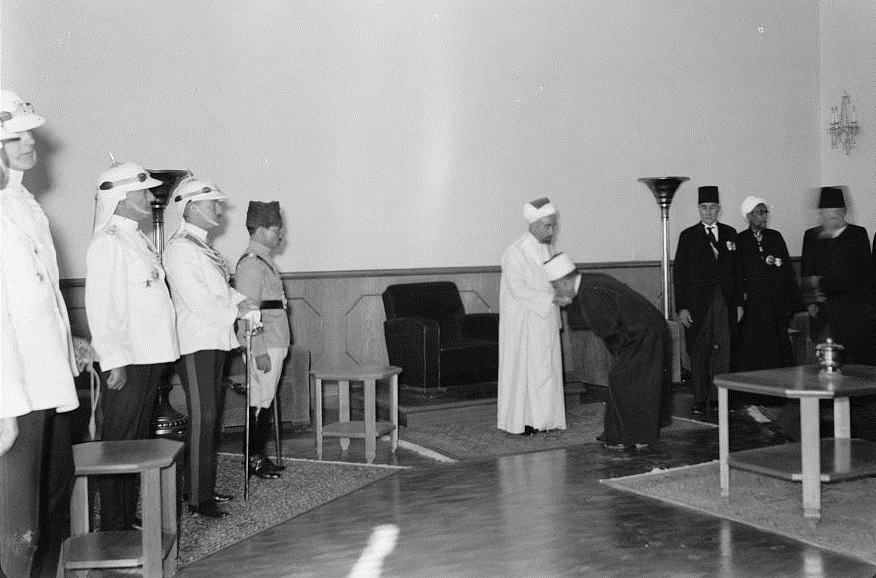 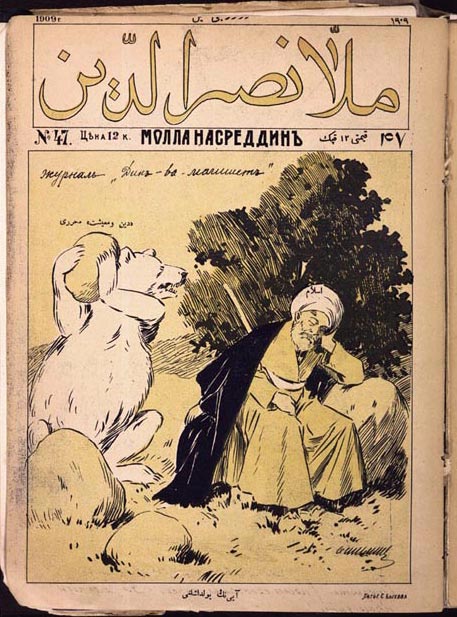 The influential Azerbaijani-language Molla Nasreddin, the first satirical journal in the Russian Empire, was published in Tiflis/Tbilisi, Georgia, the administrative capital of Transcaucasia from 1905 to 1917, and targeted the educated Azerbaijani classes. The cover page of the November 22, 1909, issue compellingly details the internal fragmentation of Islam in the Russian Caucasus. Photo: Library of Congress, USA.

Early Arab American publications catered to a variety of interests important to the growing community in the United States. Shown here is Kawkab Amirka (The Star of America), the first Arabic-language newspaper in the United States; its debut issue was published on April 15, 1892, in New York City. Photo: Library of Congress, USA. 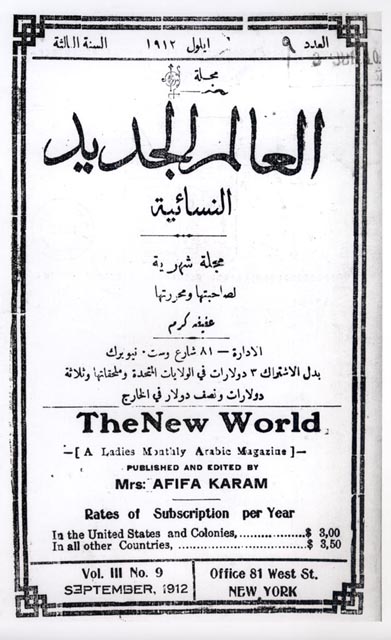 Madrasa of Bibi Khanum. View of the marble reading-stand for the Qur’an inside the mosque. Photographer: N.V. Bogaevskīĭ, N. V., between 1868-1872. Repository: Library of Congress Prints and Photographs Division Washington, D.C. 20540 USA.

The Merits of Calligraphy

Arabic calligraphy has long been recognized for its subtle beauty and expressiveness. An example of the Near East Section’s major collection of these prized creations is this sparsely yet richly decorated example in Taliq script from Persia, the text of which provides the rationale for its obvious artistic merit: “He who writes in beautiful calligraphy In the Name of God, the Merciful, the Compassionate enters paradise without judgment.” Photo: Library of Congress, USA. 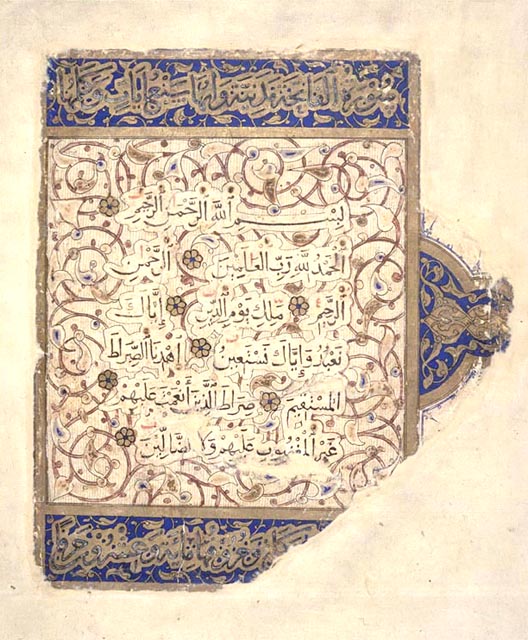 “Al-Fatihah,” the opening chapter of the Koran, is here depicted in an ornamented fragment from an early, as yet undated manuscript. Photo: Library of Congress, USA.

Qur’an with Inscriptions in Praise of Muhammad and Ali 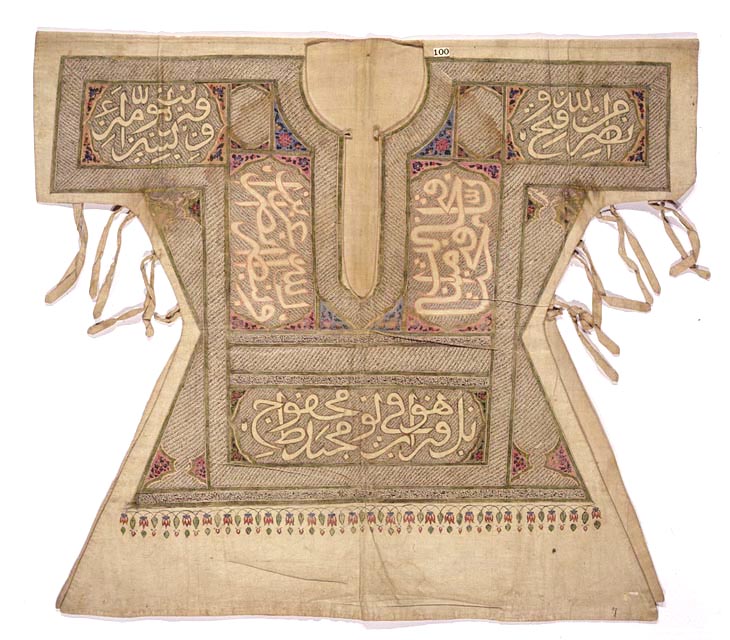 Inscribed with much of the text of the Koran, this eighteenth-century linen Shiite Muslim battle tunic, most probably from Iran or southern Iraq, also bears inscriptions in praise of the prophet Muhammad and of his son-in-law, Ali. It is eloquent testimony to the place of religious commitment in all aspects of life in the Islamic world. Across the shoulders is inscribed verse 13 of Surah 61 (“al Saff,” or Battle array): “Help from God and a speedy Victory.” Photo: Library of Congress, USA.

Poem in Praise of Muhammad

Copied in exquisite Thuluth script and complemented by spare rondels of gold, this fifteenth-century manuscript is opened to the text of al-Burdah (The Mantle), by Muhammad ibn Said al-Busiri (Upper Egypt, 1213-95). The poem, a panegyric to the Prophet Muhammad, reads, in part: “Oh, noblest of mankind! I have none but you with whom to seek refuge when doomsday comes.” Photo: Library of Congress, USA.

Shi`ite Prayer Manual – One of the most revered religious and holy figures of Islam is ‘Alī ibn Abī Ṭālib (ca. 601–661), whose honorary name, Amīr al-Mu‘minīn, translates into Persian as the “Prince of the Believers.” Written works by ‘Alī ibn Abī Ṭālib and sayings attributed to him are sacred to the Shi`ite faithful, particularly among Persian-speakers. This hand-written prayer manual displays the words of ‘Alī ibn Abī Ṭālib in the original Arabic in the Naskh calligraphic style and in a smaller-font Persian translation in red in the Nasta‘liq calligraphic style by Abū al-Qāsim Shīrāzī. Credit: Library of Congress.

Call to Morning Prayer – Prayer is at the foundation of the Islamic faith. The Library’s Near East Section manuscript collections include handwritten, illuminated prayer books and booklets and manuals featuring various prayers for different occasions. The morning prayers that set the tone for the day are highlighted in the seventeenth-century manuscript on display, which is illuminated and bound in embossed red leather. The Arabic text of the prayers is written in a very clear and bold Nasta‘liq calligraphic style. Credit: Library of Congress.

Selections from the Shahnameh, Manuscript copied in Iran, 1618. Near East Section, African and Middle Eastern Division, Library of Congress (001.00.00).

The seminal work of Persian literature is the Shahnameh, an epic poem that recounts the history of pre-Islamic Persia or Iranshahr (Greater Iran). The Shahnameh contains 62 stories, told in 990 chapters with 50,000 rhyming couplets. It is divided into three parts — the mythical, heroic, and historical ages. Written in modern Persian, the Shahnameh is a work of poetry, historiography, folklore, and cultural identity and is a continuation of the age-old tradition of storytelling in the Near East.

Hakīm Abul-Qāsim Firdawsī Tūsī (Ferdowsi) began his epic poem in 977, taking thirty-three years to complete it. The Shahnameh was written at a time when modern Persian had started to flourish and the structures and standards for the language were being set.

After its first appearance in 1010, the Shahnameh directly affected the epic and poetic works of all Persian speakers and writers for centuries. A number of scholars credit the continuity in modern Persian to the Shahnameh and the work continues to be one of the main pillars of the modern Persian language. 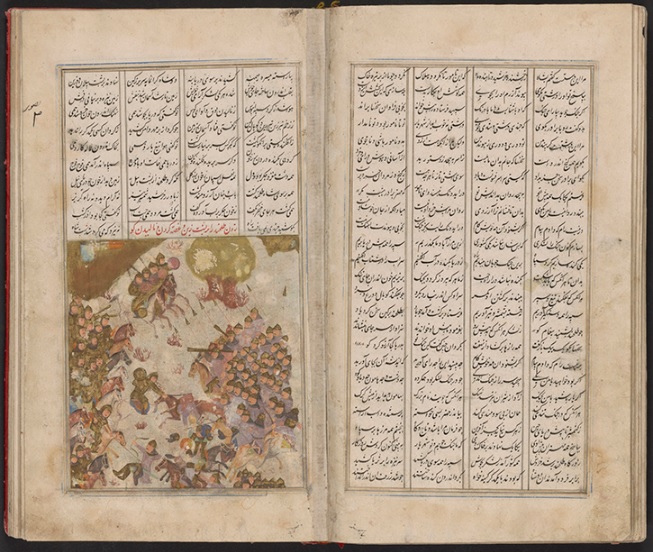 Library’s Oldest Shahnameh Manuscript: The Shahnameh, the seminal Persian literary work, is based primarily on a prose translation of an earlier Pahlavi work, known as the Xvatāynamāk (Book of Kings), from the pre-Islamic Sassanid era (224–651). The poet Daqiqi (942–980), a contemporary of the poet Ferdowsi (940–1020), began rendering the Shahnameh in verse, and, in turn, Ferdowsi included many of Daqiqi’s couplets in his version of the Shahnameh. Although the manuscript’s place of publication is not noted, it is in an Iranian style with text written in the Persian Nasta‘liq calligraphic style, one of the oldest and most prized styles of Persian calligraphy used for manuscripts. The displayed page showcases a painting of an epic battle scene. Manuscript copied in Iran, 1618. Near East Section, African and Middle Eastern Division, Library of Congress (001.00.00)

Indian Shahnameh Manuscript – This rare Shahnameh manuscript, copied in India in a regional Indian provincial style, demonstrates the popularity of the epic throughout South Asia as well as in the central Persian lands. The manuscript has highly decorated illuminated chapter and section openings in gold ink and numerous illustrations and miniature paintings that fuse Persian, Mughal Indian, regional Indian, as well as European styles. Although the manuscript is not dated, the work reflects a late-seventeenth-century to early-eighteenth-century aesthetic prevalent in India. The text is written in the Persian Nasta‘liq calligraphic style. Manuscript copied in India, late-seventeenth century–early-eighteenth century. Near East Section, African and Middle Eastern Division, Library of Congress (002.00.00) 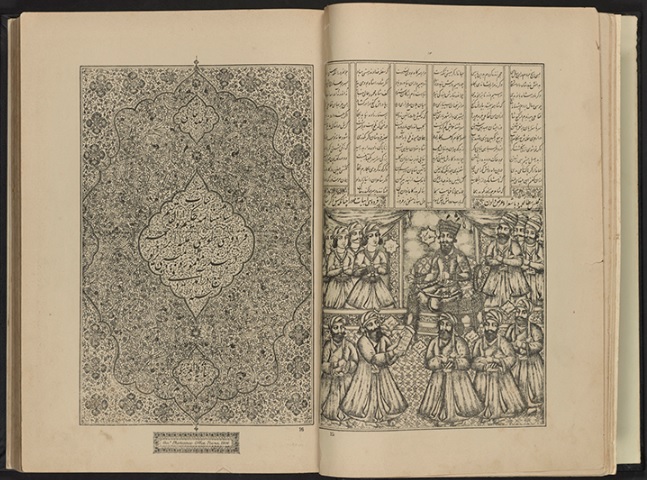 Qajar Style Shahnameh – as communication and contact between Zoroastrian communities in Iran and India expanded throughout the eighteenth and nineteenth centuries, the Indian Zoroastrian Parsi community began reconnecting to their ancestral homeland in Iran. Produced in the Iranian Qajar style, characterized by a more realistic treatment of portraiture, this twentieth-century Shahnameh includes an additional chapter introducing the notables of the Indian Parsi community to Persian speakers. Illustrated here is the court of Sultan Mahmud, to whom the Shahnameh was dedicated, surrounded by notable Persian poets including Ferdowsi. (Shahnameh). Bombay, 1913. Gift of the Mehrizi Family. Near East Section, African and Middle Eastern Division, Library of Congress. (003.00.00).

Please visit the web site of the Library of Congress for a rich collection of documents, prints and manuscripts from around the world. Please click http://www.loc.gov.

5 thoughts on “Islam and the Muslim World: An Interesting Collection of Prints, Photographs and Images at the US Library of Congress”