From John F. Kennedy to Pierre E. Trudeau to Stephen E. Harper – A Selection of Photos and Videos of His Highness the Aga Khan with USA Presidents and Canadian Prime Ministers 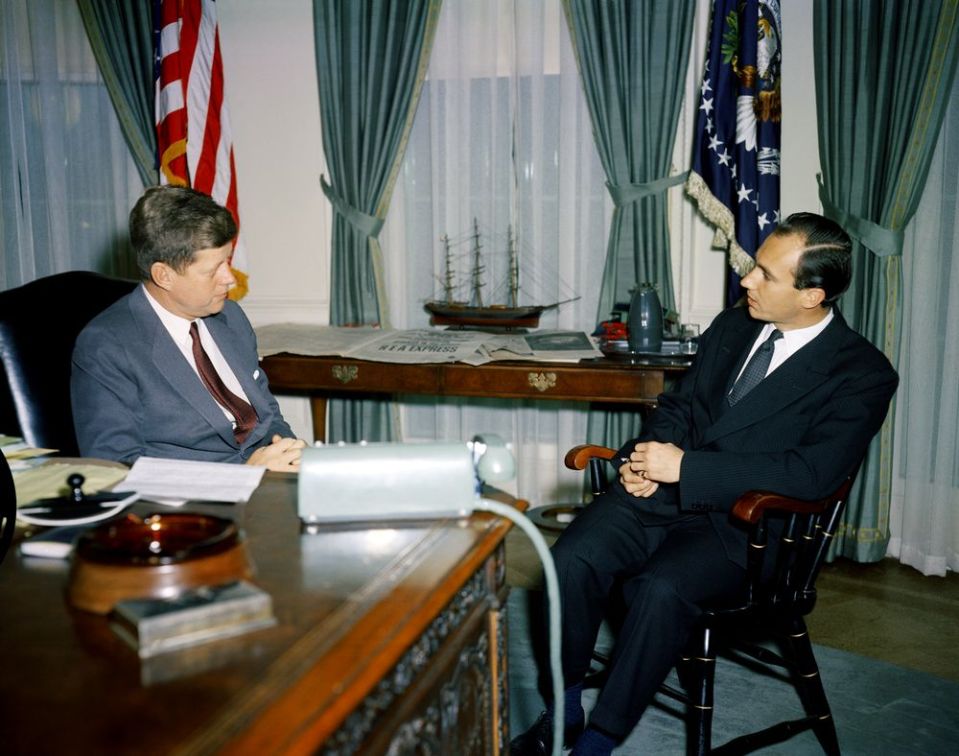 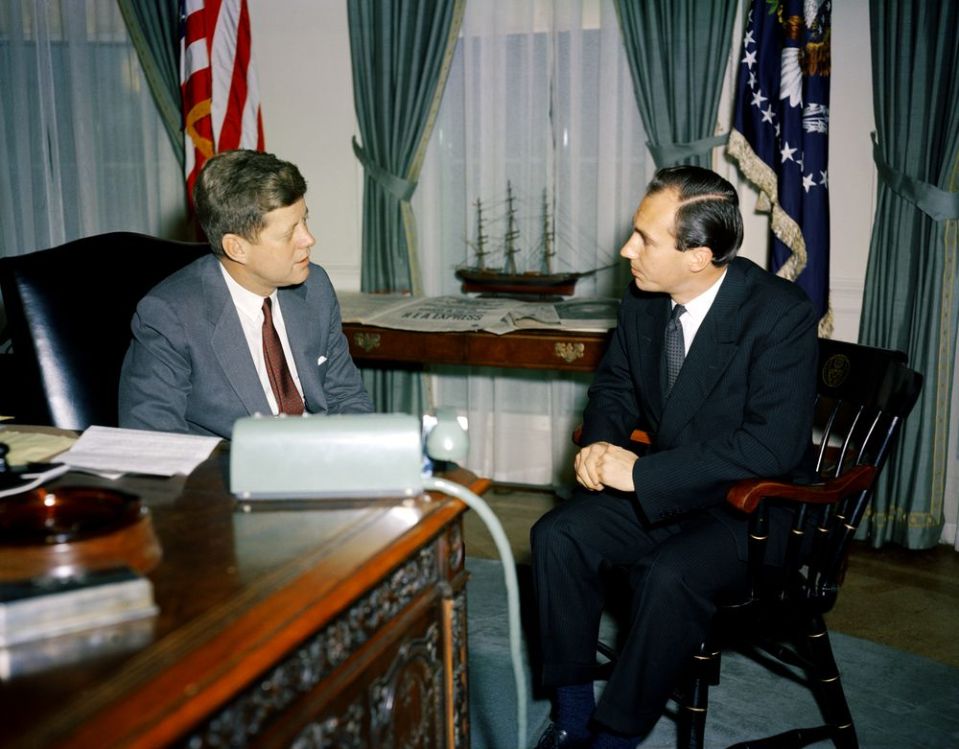 In the 1980s, when President Ronald Reagan was about to hold his first ever meeting with Mikhail Gorbachev in Switzerland, the President was staying at a fine residence outside Geneva on the shore of Lake Geneva. The villa belonged to Prince Karim Aga Khan. The Prince, the Begum and their three children, Princess Zahra and her brothers Prince Rahim and Prince Hussain, had moved out so that the President could use the house. 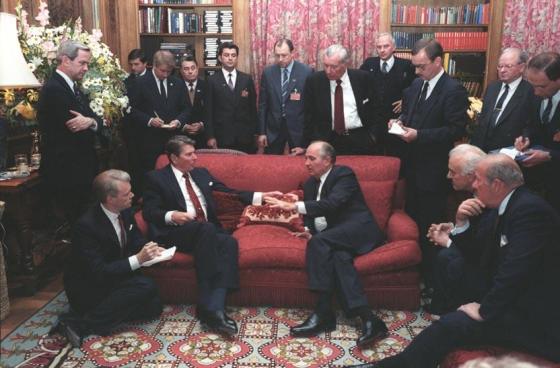 At the end, the mood was warm. Reagan left Geneva with his Strategic Defense Initiative (SDI) and with an agreement: a “nuclear war cannot be won and must never be fought.” The world breathed a sigh of relief. There was another communiqué – to Hussain Aga Khan and his parents:

“Dear Friends, On Tuesday I found one of your fish dead in the bottom of the tank. I don’t know what could have happened but I added two new ones, same kind, I hope this was alright. Thanks for letting us live in your lovely home. Ronald Reagan.”

November 28, 2000: His Highness the Aga Khan was among the distinguished panelists invited to advise US President Clinton (centre) and Secretary of State Albright (left) on the role of culture in foreign policy. 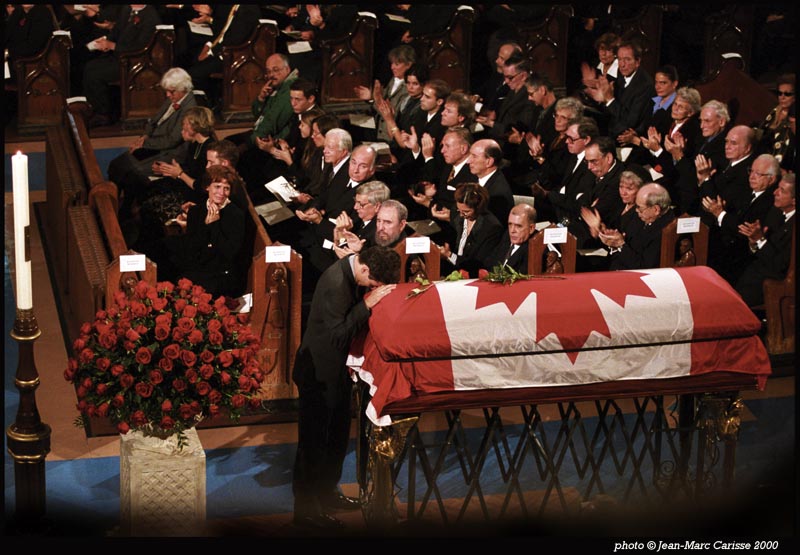 The photograph shows former Prime Mininister Pierre Elliott Trudeau’s family, friends, colleagues, and official guests in attendance to observe his passing. His son, Justin, rests his head on the casket of his father. Margaret Trudeau, in the front pew with son, Alexandre, is flanked by the beloved prime minister’s later life partner, Deborah Coyne, and their daughter, Sarah. The former prime minister’s sister, Suzette Rouleau, is on the far side of the same first row. Leonard Cohen on the right. In attendance next to Cuban President Fidel Castro are former Governor-General Romeo Leblanc, His Highness Prince Karim Aga Khan and former U.S. President Jimmy Carter. Other notables present at the ceremony not shown in this photograph include past Canadian Prime Ministers John Turner, Joseph Clark, Brian Mulroney, and Jean Chrétien. Photo: Copyright Jean-Marc Carisse. 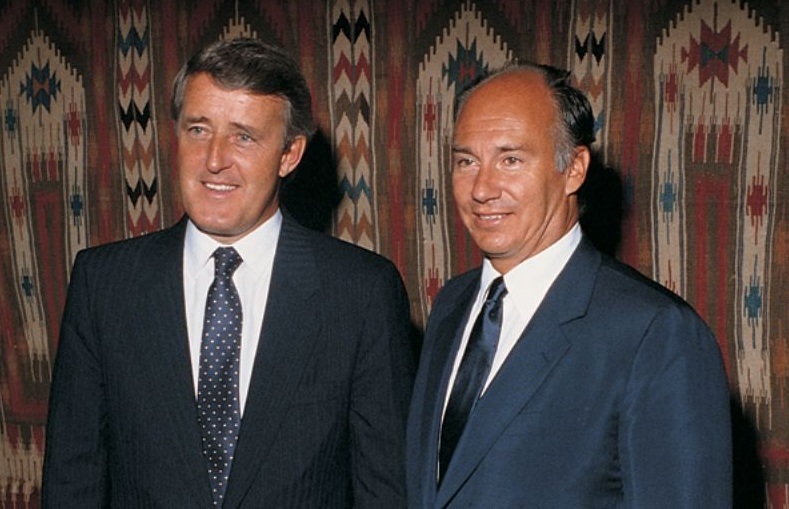 Prime Minister Brian Mulroney and His Highness the Aga Khan during the opening of the Ismaili Jamatkhana and Centre in Burnaby, Canada, in September 1985. Photo: Gary Otte, Akdn.org.

“It is an honour to welcome His Highness the Aga Khan to Canada…. In his capacity as a religious leader and through the development network that bears his name, the Aga Khan has contributed significantly to the advancement and stability in Asia and Africa while promoting Islam as a thinking, spiritual faith that teaches compassion.” — Prime Minister Jean Chretien, February 2, 2002 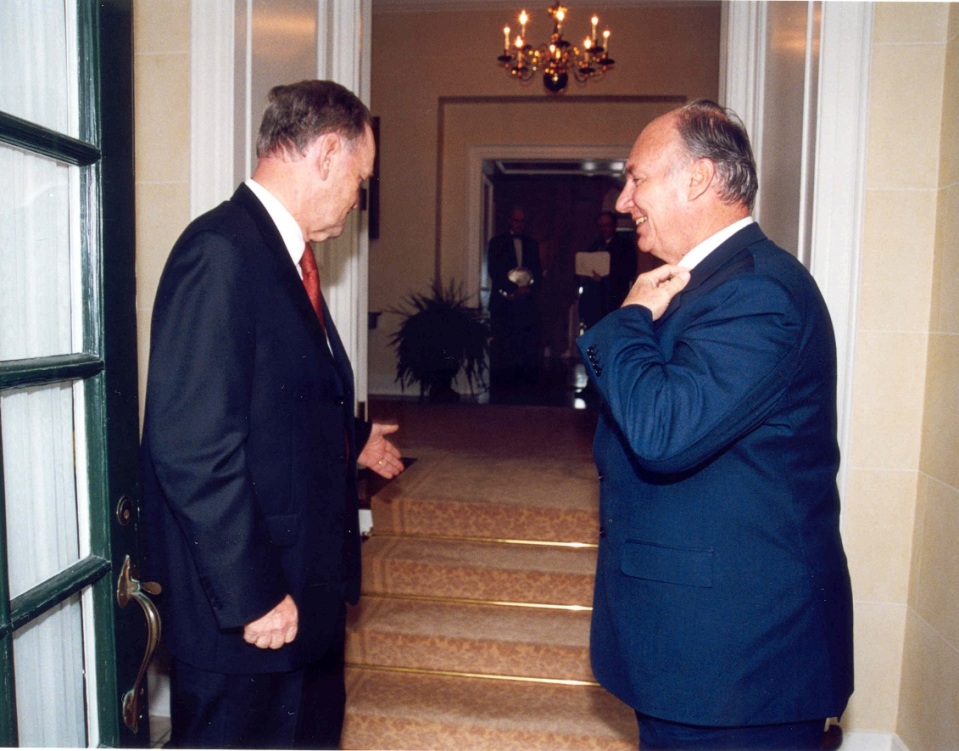 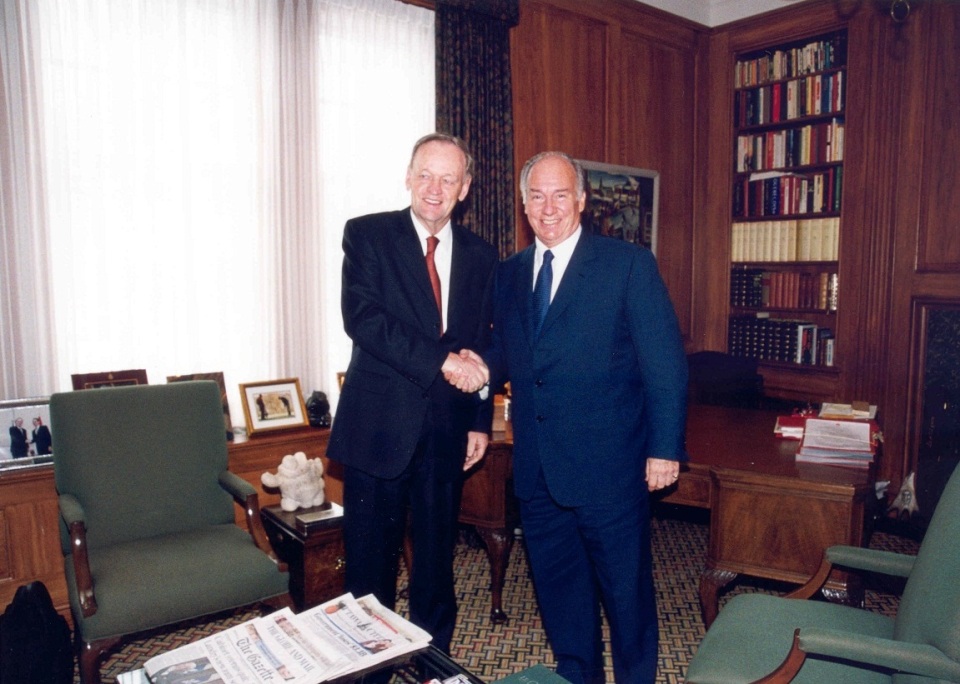 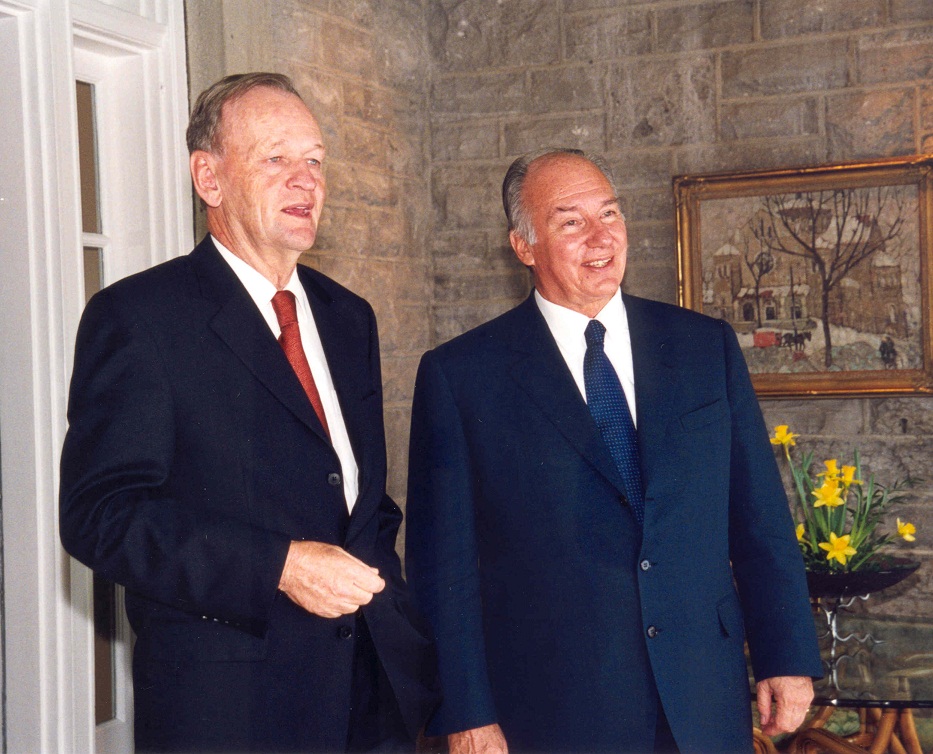 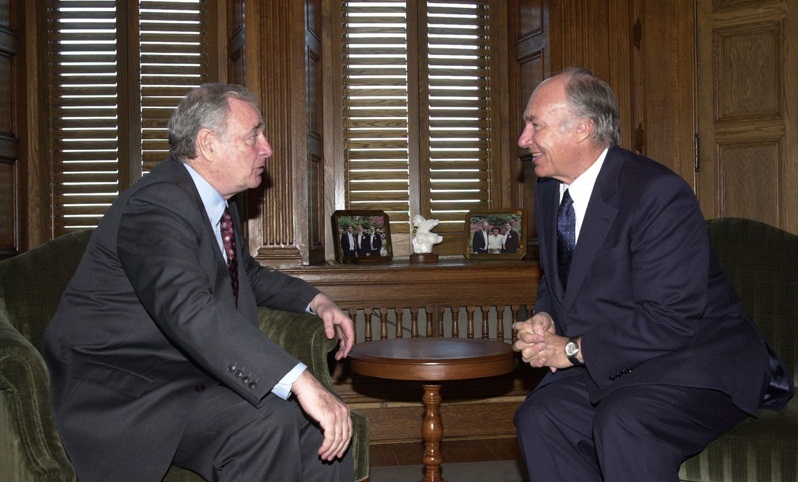 Prime Minister Stephen Harper giving his address at the opening of the Delegation of the Ismaili Imamat Building in Ottawa in the presence of His Highness the Aga Khan in 2008. Photo: The website of the Prime Minister of Canada. 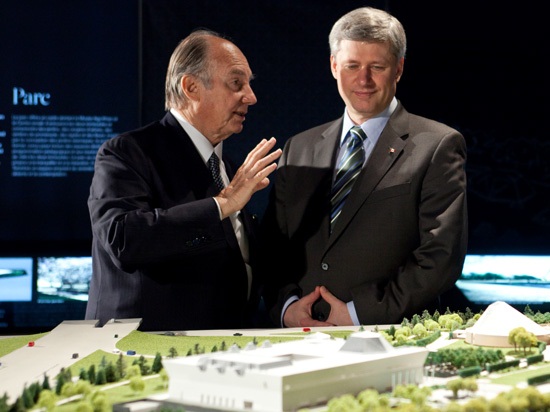 Ismailis now number roughly 70,000 in Canada. Honourary citizenship is an extraordinary recognition that is above and beyond the established system of honours, such as the Order of Canada. It is a political decision conferred upon a recipient by joint resolution of the Houses in Parliament.

“Conferring honourary citizenship upon His Highness the Aga Khan is a recognition of His Highness’s leadership as a champion of international development, pluralism and tolerance around the world and of his remarkable leadership as Imam of the worldwide Ismaili community.”  — Prime Minister Stephen E. Harper 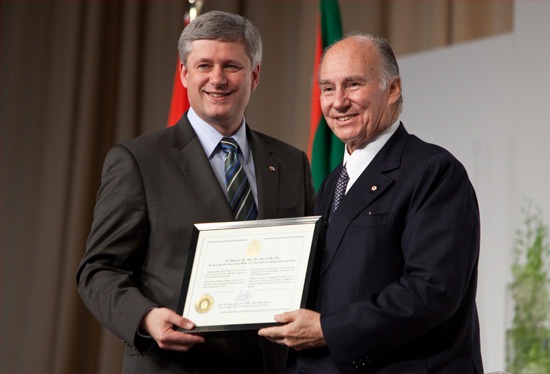 “On June 19, 2009, our House of Commons voted unanimously to bestow Honorary Canadian citizenship on his Highness, the Aga Khan. The motion introduced by our government and supported by all parties recognized,

‘…the Aga Khan, leader of the worldwide Ismaili Muslim community, is a beacon of humanitarianism, pluralism and tolerance throughout the world; …the Aga Khan is also actively involved in humanitarian and development projects throughout Asia and Africa; …[and] Canadians are grateful for the Aga Khan’s efforts in Afghanistan where today the Aga Khan Development Network is a vital partner in our efforts to secure and improve the lives of Afghan citizens.’

“To which I would only add, that the motion also recognizes the exquisite symmetry between your values and Canadian values, and our deep appreciation for the extraordinary contributions you are making to Canada and the world through the delegation of the Ismaili Imamat, the global centre for pluralism and the Aga Khan Museum.

“It is therefore my great honour and pleasure, on behalf of the Government and people of Canada, to formally present you today with that honorary Canadian citizenship.

“Welcome to our home and native land, your Highness. It is now and forever your home as well.” — Stephen Harper, the Prime Minister of Canada

Please visit the Home Page for a summary and links to all the photo essays on this blog.

We welcome feedback/letters from our readers.

Please use the LEAVE A REPLY box which appears below. Your feedback may be edited for length and brevity, and is subject to moderation. We are unable to acknowledge unpublished letters.

2 thoughts on “From John F. Kennedy to Pierre E. Trudeau to Stephen E. Harper – A Selection of Photos and Videos of His Highness the Aga Khan with USA Presidents and Canadian Prime Ministers”